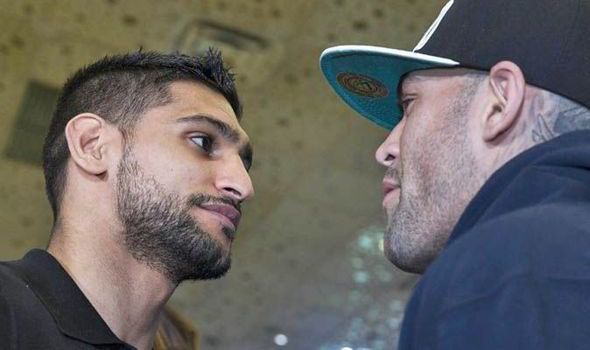 Khan aged 27 was at one point seen as the next star of the sport with his fantastic hand-speed and entertaining fight style. Since then Khan has endured some tough times and has gone on to receive an incredible amount of criticism.

Khan is still young enough to reignite his career and live up to what many of us expected from him.

Khan’s troubles appear to have started against Lamont Peterson in December of 2011 in Washington D.C. Khan came into the fight as the WBA Super light-welterweight world champion and as the IBF world champion but was to leave empty handed.

There was a lot of drama in the fight with points being taken away for pushing. There was also the issue of interference with the judges’ scorecards. Khan did enough to claim a victory in my mind but the judges were to award Peterson the win on the split-decision scores of 113-112. 113-112 and 109-115.

The fight’s result and the credibility of Peterson’s win were further called into question when ahead of the rematch ordered by the WBA, Peterson failed a drug test. Khan believes that this was proof of foul play on Peterson’s behalf during the first fight.

Moving on from the highly controversial Peterson fight Khan took on unbeaten fighter Danny Garcia. Garcia’s father Angel seemed to anger Khan in the build-up to the fight and many suggest that Angel’s actions had a big effect on the way that Khan fought.

Khan went out looking to knock Garcia out when perhaps he should have looked to out-box the heavier puncher. Khan started the fight well and looked very impressive with his fast hands.

Khan was to be caught with a vicious counter left-hook in the 3rd round which sent him to the canvas. Khan returned to his feet and opted to stand and trade with Garcia rather than to take time to get his bearings back.

This decision was to prove fatal as he was dropped twice in the 4th round before referee Kenny Bayless waved off the fight. Khan had hit an all-time low and his career was in pieces.

Before these defeats there had been talk of moving up to Welterweight and facing pound for pound king Floyd Mayweather but any chance of that was gone for now.

Hunter emphasised the need to improve the defensive side to Khan’s game and to become more thoughtful about what he was doing in the ring.

Khan made his return from back to back defeats against Carlos Molina who incidentally is facing Adrien Broner on the same card on his return from defeat. Molina wasn’t expected to prove much trouble for Khan and he retired late on in the fight. Khan has made a successful return to the ring but the signs of defensive frailty were still present.

Khan’s most recent fight back in April of last year was against Julio Diaz who many believed was past his best and there for the taking.

Khan put on a laboured display and came through the fight by the skin of his teeth following being knocked down in the 4th round. This performance did little to silence the ever expanding level of criticism and major question marks about his chin continued to grow strength.

Despite his inactivity Khan appeared the favourite to get the chance of a life time in terms of a shot against Floyd Mayweather. All the talk was that Khan was the man who would get the opportunity.

Khan turned down a shot at the then IBF champion Devon Alexander as he was warned that it wasn’t worth the risk as the Mayweather shot was all but sealed.

This wasn’t to prove the case as Marcos Maidana gained his shot by beating the rising star Adrien Broner with an excellent performance.

This all brings us to where Khan is now. Khan will face the 33 year old Luis Collazo in an extremely tough fight on the undercard of the fight which he had hoped to be involved in.

Collazo is an experienced welterweight who has been in with the likes of Ricky Hatton, Shane Mosely and Andre Berto and should provide a real test for Kahn in his debut at 147 lbs.

Collazo will be extremely confident of success following his highly impressive 2nd round knockout of Victor Ortiz in January and will be coming to win.

If Khan hasn’t got his mind fully on the Collazo fight than he will come unstuck because Collazo is a serious boxer. He realises that this is a major opportunity for him on a big stage and at 33 years of age it may be his last chance to get the big fights again.

It would seem though that Khan has more on the line as if he loses to Collazo where does he have left to go? A loss would be disastrous for his career and any possible shot at Floyd Mayweather would be completely gone.

There would be calls for Khan to retire and that would be a distinct possibility as Khan isn’t in the sport to mess about. He wants to fight the best and only the best.

Khan is the favourite coming into the fight with his superior speed and boxing talent but Collazo is a dangerous fighter.

I see Khan going on to claim a hard-fought point’s decision or late-stoppage. If he is switched on his speed should take care of Collazo but he has to be mentally right for this fight and that is a potential issue.

Khan has the potential to give Mayweather a tougher fight than most have been able to give him in recent times because of his speed. Mayweather has fought tough, big-punching guys a lot and they are made for him stylistically. Khan could prove more of an entertaining fight against Mayweather and he would deserve his shot if he beats a very game Luis Collazo.