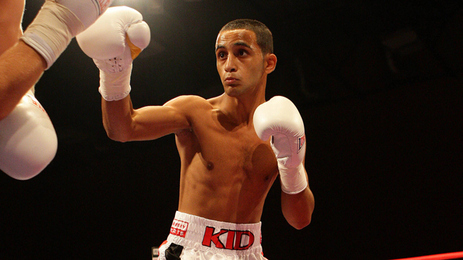 London (15 August) Kid Galahad has vowed to give a “master class” when he takes on Jazza Dickens for the British super bantamweight title at the Magna Centre on September 14th, live on Channel 5 from 8.00pm.

The WBC International champion accepts Jazza is “dangerous” but feels he is already “the best in Britain” and will show it against the English champion.

“He is a good kid but I’m seven or eight levels above him,” Galahad said.

“Jazza is a strong kid – he’s physically strong and he can punch but on the night I’m going to be too much for him and it’s going to show in the fight.”

But 22-year-old Dickens will certainly not make it an easy night for Kid.

Similarly holding a flawless pro record of 16 wins with five knockouts, Dickens is the English champion, picking up the belt with a 10-round unanimous decision over the previously unbeaten Jon Fernandes in Liverpool.

Having already taken away an undefeated record, Jazza will be eager to do the same to Galahad.

“Some may see this as a 50/50 fight – he is a dangerous opponent, but on the night, I’m going to show I’m on a different level,” Galahad said.

“You have not seen the best of me – there is much more to come – and I will be flawless on the night.

“I’m going to put on a tremendous performance – this one will be a master class – I’ll adapt to anything he brings.

“I’m feeling strong and sharp from my last fight, I’m always training, always in the gym, always ready to fight – I can’t wait to get in there.

“I’m going to show my fans excitement, drama – and that’s what it’s going to be.

“I’m already the best in Britain and I’m going to show it in the Dickens fight.”

Supporting Galahad at Magna will be middleweight sensation Chris Eubank Jr in his 11th professional contest and current World Youth super-heavyweight champion Hughie Fury in his ninth outing as a pro.

The undercard will also feature a whole host of local talent.