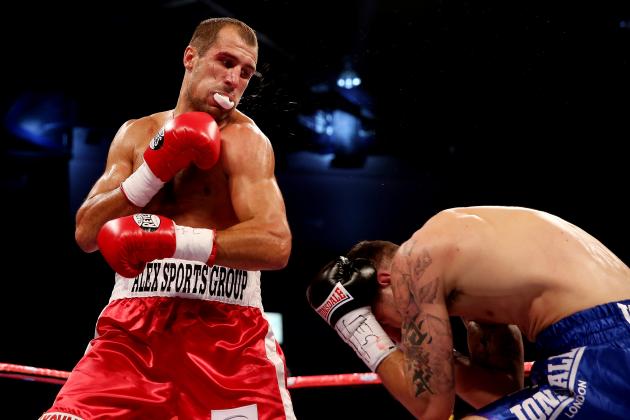 It was the one liner that made noise through the twitter waves on Saturday. “Adonis is a piece of shit,” stated Sergey Kovalev after his 7th round knockout of Cedric Agnew. Moments after his fight, Kovalev met the media and reaffirmed his beliefs.

“Yes it is true; he is a piece of shit. He ran from me,” explained Kovalev.

While Kovalev was in fight week mode, the news that Adonis Stevenson’s move to Showtime broke that all but ended their likely showdown. That may have been a distraction to a fighter but not for Kovalev.

“I don’t worry about it now,” said Kovalev on if he cared about Stevenson’s move to Showtime. “ Yes and no but I don’t care about it now. I didn’t think about it at all because I already knew he wouldn’t fight me.”

Kovalev nickname is “The Krusher” and he has crushed all of his opposition since landing on our television screens. Kovalev however wanted to prove he was more than just a frontrunner finishing opponents early.

“My plan was 10 rounds this time. He had an uncomfortable style, kept his hands up very close. We stood at a good distance and picked out an attack and we got to him. He’s very patient.  But when I seen I could finish the fight, I did it because I has the two cuts, one cut from his head  and one cut from his elbow. It was my mistake. It was my distance we got in his shoulder area. I tried to do more than 3 or 4 rounds because people don’t think I can go more than that.”

The two biggest fights for Kovalev are with the two fighters ( Adonis Stevenson and Bernard Hopkins) that as of right now are on the rival network in the 175 lb. division. When Kovalev was the number 1 contender for Hopkins IBF title, the fight could not be materialized. Now with Stevenson likely out the picture, is Kovalev one of the most avoided guys in the sport? Kovalev says, “I don’t know. They’re maybe not fighters; they’re business man trying to get easy money.”