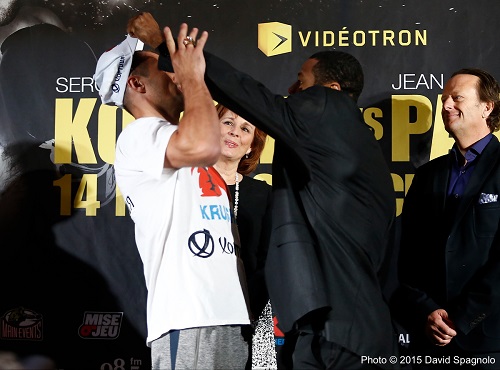 I studied French in school for six years, but I remember nothing because I wasn’t interested in this language; my time was spent learning English. It will be big action for Saturday night. I love to be here, and I am glad to be here in Canada. I am expecting a lot of fans because I was here in November 2013. Saturday night will be two best boxers of light heavyweight division facing each other. Jean Pascal is tough boxer and Saturday I will see how tough. I am not going say any prediction. This is boxing; anything can happen with a fight. For me, this fight is very interesting because it is next step in my career, the next test in my career. For myself I want to prove who I am on this level, in front in this huge arena, in my first time fighting in huge arena like this. I am very happy and waiting for Saturday. Thank you so much.

[On comments by John David Jackson about Jean Pascal] I don’t know because I didn’t read what John said. It is his opinion. It will be me fighting in the ring on Saturday. What John sees is his vision. My vision is mine and may be different. I didn’t watch very many Pascal fights. I understand his style. I only watch a couple rounds of my opponents. I don’t spend much time watching fights of my opponents. If John thinks it is true, I believe him.

[On not fighting in front of his home crowd in Russia] This is a huge arena for me. This is something new for me. I love experiencing something new in my career. I love travelling the world to fight. If my job lets me travel and get victory, then it is good for me. It makes me happy. It is big motivation for me because a lot of people will be watching this fight. I am now responsible for three titles and it pushes me to work harder. I would like to fight in Russia but I don’t know when the opportunity will happen.

[On not taking easier fights] We are Russian, we are ready for anything. We are ready to make good fights. It is interesting fight. If I look for easy opponents, it will not be interesting for anyone. Who is the best right now in this division? We will find this out Saturday.

Jean Pascal, former light heavyweight champion
It will be a great fight. I have 15 trainers because I am a general and I have an army behind me. Kovalev doesn’t like to talk and lets his trainer do the talking. John David Jackson doesn’t have to get in the ring with me. Sergey does. He needs to man up and talk for himself. I am a general. I’m not a follower. I am a wolf, not a sheep.

In hockey, Russian players do well during the regular season and then not do well in the play-offs. So I think that, like those hockey players, Kovalev will not be able to perform the same on Saturday night against me as he has in the past against other fighters. Nobody should take me lightly.

[On comments he made to the press about knocking Sergey out] I said the best scenario is to give the fans 12 good rounds and then try to knock him out in the last 15 seconds of the fight.

I will give 110% on Saturday night, but I cannot predict the future. This is like game seven of the Stanley Cup Finals, and I am prepared to do whatever it takes to win. I’ve got balls and big ones, and you will see them on Saturday night.

Kathy Duva, CEO of Main Events
We are so happy to be here in boxing-crazy Quebec. This fight is exactly what boxing is supposed to be: the two best fighters who are willing to fight each other. That is what this promotion is about: The very best against each other. Jean Bedard and his team have created a market that is the model for other promotions. It is going be hard to go into opposite sides of the ring from Interbox on Saturday night. I want to thank HBO and Peter Nelson for having the vision to see what we saw in Sergey Kovalev. This is exactly the kind of thing that gets me out of bed in the morning. This is going to be an amazing event and I am privileged to be able to watch it live.

This has been a wonderful experience so far. Thank you to Interbox and thanks, Jean Pascal for being a man for taking this fight.

Jean Bedard, President of Interbox
I want to thank our friends from HBO, who have put their trust in us to deliver a great product. We intend to work with them in the future to bring many more great events to Canada. It has also been a pleasure working with Main Events and Kathy Duva. This sets the stage for what will be exciting times ahead in boxing. Interbox is optimistic about the future. Thanks to Jean Pascal and Sergey Kovalev for making this fight happen.

John David Jackson, Trainer to Sergey Kovalev
It is a pleasure to be here. Thank you for allowing us to be here. I thought I retired from boxing. In this business, this is what we do. There is a lot of hostility from Team Pascal. I said a few things, and it got a rise out of Team Pascal, so I did my job. We got under his skin, so we did what we needed to do. He needs to back up all his talk on Saturday night.

[On his comments in the press] I am not going to back down on what I said. It is not about me. They have to fight on Saturday night, not me. I am glad they showed the weakness of their mentality. I said what I said, and they reacted the way they did so I’m glad.

[On finding sparring partners for Sergey] It is always hard because Sergey is Sergey. In the ring, he is all business. We aren’t going to find someone who fights just like Pascal to spar with. That is what boxing is about; a true fighter is going to find what he has to do to be victorious. Sergey is well prepared for Saturday night.

Egis Klimas, Manager of Sergey Kovalev
What a great city, Montreal. What nice people. It is a big pleasure to be here. I want to thank Interbox. I want to thank Main Events, our promoter, and HBO for bringing us here to Montreal. It is a pleasure to represent Sergey Kovalev. He came in 2009 to the United States. He put his career into my hands. I was 100% trusted by him. We had a long and interesting run to get here. He is proud to have three belts. I want to thank him for putting me in the situation that I am in today. I don’t know who talks, but Sergey Kovalev does not like to talk and neither do I. I have big respect for Pascal for taking this fight. He could have taken an easier fight. He is a tough fighter. He is not a puncher. Don’t miss it on Saturday night. Be here or watch on television because it is going to be a great fight.

Marc Ramsay, Jean Pascal’s trainer
On my way to the Centre Bell, someone asked me if I was starting to get nervous. This is why we do what we do; we want to live these challenges. We don’t have the pressure to fight on the road, to defend an undefeated record like Kovalev does. This is a no-lose situation for us. For the last ten weeks, we have studied Kovalev. We have a profile of him, and I have a lot of respect for Mr. Kovalev. They know how to conduct themselves inside and outside of the ring. I have coached Pascal since he was 14 years old. I lead him to the national team and Olympic Games. I lead him to the world championship. It is easy to take a fighter who is already built up and do something with him. It is a different to work someone from the beginning. Until then, you [points to John David Jackson] should be quiet.

To me, Sergey Kovalev is a solid classic boxer. It isn’t hard to analyze him. He is best opponent he have ever faced.

Roy Jones Jr., Jean Pascal’s Assistant Trainer
Thank you. It is an honor and a pleasure to be here. It is always great to be here and back working with HBO. It is a great crew of people here. Boxing is an egotistical sport. It says a lot about Marc [Ramsay] that he reached out to me to assist with Pascal’s training. He is open-minded because he is willing to ask for anything that Jean needs to help get him a victory. I would like to thank everyone for coming out for this. It is so great to see two of the top guys facing each other. That is what we live for. I can’t wait until Saturday night. I look forward to a great fight.

Peter Nelson, Vice President of Programming HBO Sports
Thank you. This is a great fight. We couldn’t be more excited and thrilled to be back in Montreal. We want to thank Kathy for bringing Sergey to us. We are a platform which provides the fans the fights that they want to see. Whenever the best fight the best the sport wins. The winner of this fight will benefit from their legacy. These fighters care more about their legacies than their earnings. Sergey Kovalev has proven that over and over again by telling us he will fight anyone. I want to thank Interbox and Main Events. We look forward to a tremendous fight on Saturday. Also Glazkov vs. Cunningham and Chilemba vs. Lepikhin are two incredible fights to make this a tremendous triple header.

[In response to John David Jackson’s comments] In defense of Marc Ramsay we are a small unit of trainers. For someone turn around and try to discredit and be that disrespectful is uncalled for. Sergey understands what it means to develop as a fighter. He knows what that brings to the table. Not everyone is lucky to have a Sergey Kovalev fall in our laps like Jackson was.

Robert Schinke, Pascal’s Sports Psychologist
We are very excited about this fight. We don’t take it lightly. I have worked with Jean since he was 16 years old. In the psychological preparation for this fight, Jean Pascal he needs to be focused. He should not peak Saturday morning. We also needed to understand the opponent in front of us, the athlete and his coaches, their history and patterns. We are fully prepared