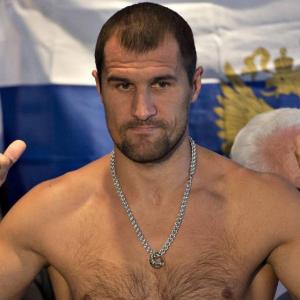 LONDON (24 July) – Knockout king Sergey Kovalev has labeled Adonis Stevenson as “not a real champion” and dreams of capturing his WBC belt.

The unified WBA, WBO and IBF light-heavyweight world champion has conquered all before him, including wins over the legendary Bernard Hopkins and Jean Pascal, but a showdown with 175-pound rival and current WBC champion Stevenson, has eluded him.

A clash has been much talked about over the past year, but the 32-year-old Kovalev is now set to do battle this Saturday night, live and exclusive on BoxNation, against Frenchman Nadjib Mohammedi, but his ambition is still to complete his title haul by adding the WBC belt.

“I don’t want to speak about him [Stevenson] at all because he’s not a real champion. He got lucky once against Chad Dawson when Dawson dropped his title against Andre Ward.

“Andre Ward destroyed him and he didn’t recover for the fight against Stevenson. He got lucky and right now is still “champion”. It’s smart for the business, but it’s not good for boxing,” said Kovalev.

“I’m ready for any fight, but I keep in my mind to win the WBC title, first of all, but I’m open for any fight. I think I’m a regular world champion, but I have three world titles, the WBO, WBA, and IBF, but my dream is to get a fourth.

“We’ll see what happens in the future. I hope somebody beats Stevenson and gets the WBC title, and then we can make the fight. Even if it is a harder or tougher boxer, it’s no problem. I just need an agreement for a fight for the WBC and a unification,” he said.

The formidable Russian, who is undefeated in 28 bouts with 24 knockouts, is well aware however that a tough task lies ahead this weekend against Mohammedi.

The 30-year-old, a ten year professional, knows his way around the ring with 37 wins and only three losses, goes into the fight on a four-year winning streak with a chance of hitting the big-time should he upset the odds, something which Kovalev is well aware of.

“Mohammedi is not a puncher, but he knows how to box. He’s smart, sets traps and improvises a lot in the ring. He doesn’t just come forward but has good movement and angles,” said Kovalev.

“He’s also ready for 12 rounds and has good stamina and conditioning. He’s a very good opponent and is dangerous because he’s very motivated.

“I know what motivation can do for a fighter and when a man is motivated he can do a lot of things and is very dangerous. I’m prepared for 12 rounds because you never know what is going to happen in boxing,” he said.

The man who Kovalev overcame in his last fight, Canadian ace Pascal, will also be on the card when he takes on unbeaten Cuban Yunieski Gonzalez in a ten-round contest at the Mandalay Bay in Las Vegas.

“There is no place like home. I have been fighting at home my whole career. I am glad to be in Vegas; it is my first time fighting here. Every fighter on my level wants to fight at least one time in Vegas,” said Pascal.

The Enfield boxer was set to face WBA world champion Fedor Chudinov, but the Russian was forced to delay the fight due to a broken nose sustained in training.

26-year-old Buglioni, however, will be looking to stay busy and get a win under his belt against the tough Mexican before eyeing up his shot at world title glory in the Autumn.

Another top name will feature on the Wembley Arena show with Billy Joe Saunders, who will fight Andy Lee for the WBO middleweight world title on September 19 in a major showdown in Limerick, facing France’s Yoann Bloyer in a crucial must-win fight.

Undefeated super-featherweight Mitchell Smith is also back in action this evening against Dennis Tubieron for the WBO Inter-Continental title.