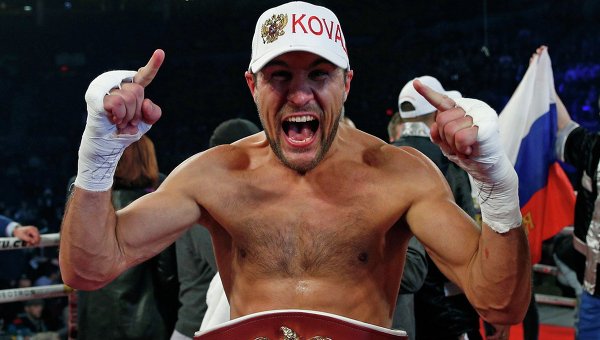 It was a split sight telecast for HBO with Brandon Rios facing Diego Chaves in a 10 round affair with the max limit of 148lbs from the Cosmopolitan of Las Vegas in Las Vegas, Nevada, and Sergey Kovalev defending his light heavyweight title against Blake Caparello, live from the Revel Resort in Atlantic City, New Jersey, and it was a fight that Kovalev needed to win in order to secure a November bout with fellow 175lb title holder Bernard Hopkins.

Kovalev was down in round 1, but it was the direct product of a low-blow combined with some off-balanced footing which Caparello took advantage of before sending Kovalev down to the canvas with a straight right hand. Kovalev, who had been down only once before in his career, was able to get up and finish the round strong.

The idea of being knocked down and potentially putting his unification bout with Hopkins into jeopardy seemed to light a real fire under a fighter that already performs with a constantly lit flame. Kovalev came out with guns blazing in round two; he was in real “seek and destroy” mode.

Kovalev landed a devastating straight right to the body of Caparello and it sent him to the canvas. Caparello reacted in a way that suggested he’d been hit with a jolt of electricity; he was clearly affected by the shot throughout the fight.

Later in the round, Caparello was again sent to the canvas after being on the receiving end of a vicious barrage of punches from Kovalev. It was a flash knockdown capped off by a left hook, but it was foreshadowing of what was to come.

Caparello got off the deck but he was chump meat at that point. Kovalev increased his pressure and badly hurt Caparello once more, this time enough for referee Sparkle Lee to call a halt to the bout.

Following the fight, HBO’s Max Kellerman interviewed both Kovalev and Hopkins ringside. It was a very intense interview and Hopkins, who will be making his return to HBO following a two fight stint with Showtime, was in rare form.

“I always run towards the fire not away from the fire, that’s what I’ve built my career on,” Hopkins told Kellerman in response to the question of why take the dangerous power puncher Kovalev.

Kovalev was candid, but remained respectful, stating that he will beat Hopkins by simply boxing.

My hats off to Hopkins who is a real fighter, the kind of fighter boxing needs more of and at age 49 he is clearly not slowing down.