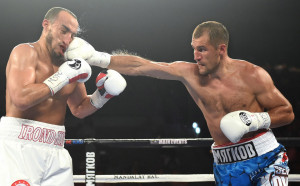 While Sergey Kovalev struggles to be a live gate draw, his television ratings are still up to par for a flagship HBO fighter. While there may have been less than 2000 people in attendance at the Mandalay Bay this past weekend in Las Vegas, Kovalev’s destruction of an unmatched and undeserving mandatory in three rounds was seen by over one million people. The figures for Kovalev’s three round destruction over Nadjib Mohammedi averaged 1.014 million viewers.

On the undercard that perhaps was a candidate for robbery of the year thus far, Jean Pascal won a unanimous decision over Yunieski Gonzalez. That fight was averaged 883K viewers according to Nielsen Research.

The co-feature was full of action where the Miami-based Cuban was the more aggressive fighter outworking and out-landing Jean Pascal. Having Pascal on the undercard of the Kovalev fight was meant to possible line up a rematch in Canada between Kovalev and Pascal. However, after watching the fight multiple times, the only rematch Pascal should be fighting is against Gonzalez.

Kovalev is slated to return in November in his home country of Russia. If his promoter Kathy Duva of Main Events had her way, it would be against countrymen Artur Beterbiev. Beterbiev is promoted by GYM Promotions and is advised by Al Haymon. If that statement sounds familiar in the light-heavyweight division, Kovalev’s biggest rival at 175, Adonis Stevenson falls under the same dynamic.

However, Yvon Michel, Beterbiev’s promoter, said that his fighter would be willing to fight on HBO if that’s what it had to take.

Stevenson walked away from HBO to Showtime and signed with Haymon last year when a fight with Kovalev was on the table. This year Duva and Kovalev walked away from a purse bid for the fight, fearing that Haymon would win a purse bid and have Kovalev fight on one of the PBC platforms, which would possibly damage their relationship with HBO, who have been clear that they are in the Sergey Kovalev business. So skepticism says not to expect a Kovalev-Beterbiev clash this fall.