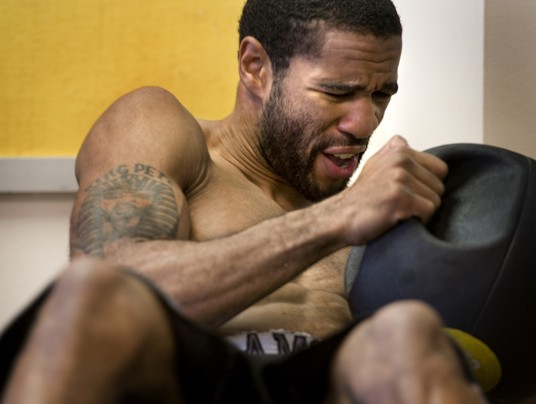 Lamont Peterson talks about his first title defense and fight in 14 months and dispels the notion of ring rust….
“To me it feels great to get back into the ring and defend my IBF title. The layoff did not hurt me because I’ve been in the gym training like I was going to fight for the past year,” said Peterson “I don’t believe in ring rust a fighter fights and that’s what I do. But one good thing with the time off is that I have been able to rest my body and work on fine tuning my skills. I’m ready to fight now.”
Lamont Peterson on training in Washington, D.C….
“For a lot of fighters having training camp at home can be a major distraction. But for me its the total opposite. I like training at home I know where everything is. I don’t have problems getting back and forth from the gym my routine is regular. I also have the help of family friends during the training camp if I need anything. But I’m also a very self disciplined individual, so at the end of the day, it really would not matter where I trained.”
Lamont Peterson on sparring…
“We have brought several different fighters into camp to work with. But I have done the most work with Dominic Wade a middleweight who is fighting on the card at the Armory. He is a heavy puncher who has a lot speed and power. So its been great to get the work in with him.”
Lamont Peterson on fighting at home in Washington, D.C…..
“I always like fighting here at home. Early on in my career I did not get a chance to do so. Any opportunity I get to fight here we take it. I love the support I get from the fans and the city. Washington, D.C. is a big fight town and I want to give them the great show they expect. It also helps to hear the voices of your friends and family cheering you own.”