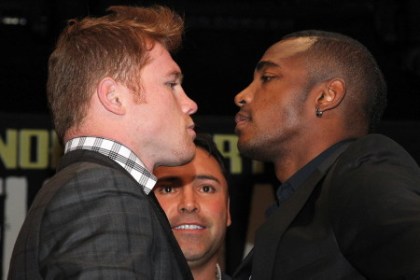 With the two biggest fights involving the sports two biggest draws in the books, fight fans have begun to focus on perhaps the most intriguing matchup on the calendar thus far. That matchup is between junior middleweights Saul “Canelo” Alvarez and Cuban born fighter Erislandy Lara, which will take place on July 12th at the MGM Grand in Las Vegas, Nevada. The bout, set at a catchweight of 155lbs, will be broadcasted live on ShowTime PPV.

Fight fans know that this is the fight that means more to the sport than any other this year because it involves two of the best fighters in their respective divisions at the pinnacle of their careers. This match has been building up for a long time and based on both fighters’ statements and attitudes toward one another expressed at this week’s promotional tour it appears as though there is a genuine animosity.

Lara has been lobbying for a fight with Canelo for some time, but it was somewhat surprising to see Canelo take the fight with Lara, who many believe is the superior fighter to that of Canelo and possesses a far greater risk of actually defeating him.

This situation is similar to the one Alvarez was in with Austin Trout, who Alvarez defeated by 12UD back in April of last year. Still, the argument can be made that Lara is a totally different animal at a totally different time in his career. Alvarez is a much more substantiated draw now than he was a year ago and could’ve very well as easily avoided Lara, opting to fight a safer opponent instead.

However, Lara does not see it that way. The Houston-based fighter believes that he successfully backed Canelo into a corner and his decision to take the fight wasn’t a decision at all, but rather the culmination of a relentless pursuit on the part of Lara.

There was speculation from the beginning was that not even Oscar De La Hoya wanted Canelo to take the fight with Lara and the question has been asked many times to Canelo himself by media, fans, and even a few in his inner circle.

With his manager, Luis DeCubas Jr., as a translator, Lara spoke to the media at the New York press conference yesterday, responding to the question: Why do you think “Canelo” Alvarez took the fight with you, even though many advised him against it?

“Because he knows just like everybody in the division knows, nobody wants to fight me because not only am I dangerous, but I beat everybody,” Lara said through his manager DeCubas Jr.

Lara is mistaken and Canelo could’ve very well passed him up, perhaps for the next year or so. Instead, Canelo took the tough opponent without a gun to his head and Lara should give him credit for that, at least the same kind of credit Lara feels he deserves for navigating his career in the position to get the fight.