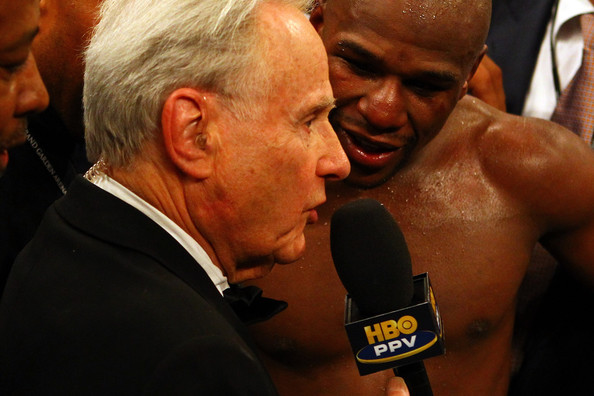 Thaboxingvoice.com conducted a recent phone interview with HBO commentator Larry Merchant. In the interview Merchant touched on a variety of topics including the upcoming boxing schedule as well as the potential surrounding 50-Cent’s TMT Promotions.

Merchant started the conversation by discussing the September 15th Middleweight title fight between Sergio Martinez and Julio Cesar Chavez Jr. With the public opinion on who will win the fight swaying towards Chavez Jr. more and more, I wondered how Merchant saw the fight and who he felt was favorite to win.

“Who I think is the favorite is connected to who the actual favorite is, Martinez is the favorite and there is no surprise about that. I don’t know if [the betting line] will be 8-5 or 2-1, maybe it will depend on how many Chavez fans show up and bet on Chavez.

“I see what everybody else sees, young, strong and ambitious kid in Chavez Jr. against an older, more athletic, maybe sharper punching champion [Martinez]. At the end of the night we’ll either find out that the more athletic guy and sharper puncher prevails or the younger, bigger challenger can deal with [Martinez’s] strength and exposes Martinez as being the older champion. I think that’s the basics of the fight,” Merchant said.

A year ago, most boxing folks would not have considered Chavez Jr. beating Martinez; in fact, most assumed Chavez Jr. wouldn’t take that fight for risks of losing. Merchant weighed in on what he felt has been the cause for Chavez’s turnaround.

“Chavez dominated two credible middleweights Rubio and Lee, and he’s shown his growth from a prospect to a suspect to a prospect again into somebody who has gained respect. I guess the reason that more and more people are giving him a chance is because most people were wavering or skeptical about [Chavez] early on and now they don’t want to miss on how good he conceivably might be.”

The other fight on September 15th matches another very popular Mexican star in Saul “Canelo” Alvarez against Josesito Lopez on the Showtime network. HBO and Showtime will be battling it out for ratings and this fight is amongst many other network competing dates. Merchant spoke about the September 15th date in relations to his feelings on the competition, as well as network rivalry in general.

“Regarding September 15th I’d rather all fans got a chance to see both fights, maybe that’s how it’ll work out? Maybe they’ll buy the Martinez-Chavez fight and also get a chance to watch Canelo Alvarez fight. I think it seems kind of stupid when you think about it, but at the same time if there are two big fights and 20,000-25,000 fans in two different arenas within a mile it also could help to confirm a big boxing date for boxing in general.

“About the other dates that clash, I think traditionally there have been some dates that have worked for the networks when there are more viewers available and so sometimes you have these conflicts. Sometimes it’s because they don’t want to go head to head with the World Series or now with the Olympics, so the dates get saved up in an Olympic year and suddenly September and October get jammed. It’s part of the schedule.”

Before Martinez-Chavez Jr. and Alvarez-Lopez, the other big fight will take place on September 8th with Andre Ward taking on light heavyweight titlist Chad Dawson in a super middleweight bout, the fight will be televised on HBO. I asked Merchant his thoughts on Ward and the star power he possess now, as well as his potential to be PPV entity.

“It depends on how you define star. In the boxing world I would say [Andre Ward] is a star, but as far as fans are concerned out there, as far as galvanizing the casual fan of boxing that hasn’t happened yet, I don’t know if it will happen. It depends on the myriad of factors, who the opponent is, whether there is some drama in his fights, the kinds of things that elevate a fighter who is already in his prime and if some guy is going to be a star its usually happened by now, a star in terms of being an attraction. Whether he can make it happen on a bigger stage and become a PPV star, I would say at this point, seems like a reach, but maybe he’s got the reach,” Merchant said.

There has been plenty of media and fan reaction to the Ward-Dawson fight, a fight most are really looking forward to, me included. However, the one aspect to the fight that hasn’t been very flattering is the notion that Ward and Dawson won’t amount to an eye pleasing sort of fight. Some assume that their styles won’t make for an action packed fight and instead more of a boxing match. There is nothing wrong with that, but those aren’t the kind of fights that resonate with the casual fan, the kind of fan that turn boxing stars into superstars. Merchant analyzed that aspect of the fight as well as a glimpse into what could potentially refute some of those claims.

“It’s understandable that these guys are boxers and they use their boxing skills as well as their will and ambition to get them to this point and they’ve fought some tough fights, but they’ve not provided the kind of explosion that suggests that they are going to explode on each other.

“Sometimes in a fight like this somebody will decide that they’re going to have to step up and open a door and barge into it. Maybe that’s Dawson because he’s fighting on the other guys turf and he knows he’s going to have to win the fight,” Merchant said.

The winner of Ward-Dawson will put themselves in a very powerful position; however, the winner must capitalize off of the victory with another significant fight. Guys like Edwin Rodriguez and Adonis Stevenson have potential, but they are not ready for Ward/Dawson. Froch is out there, but assuming Ward wins I’m not sure there has been enough time in between the Super Six finale. Merchant had an interesting thought on what makes sense for the winner.

“I would rather see the winner fight Cloud assuming he beats Pascal, if that fight even happens. To me, Cloud is the guy sitting out there that makes good fights. If Ward is going to make a name for himself and if he can win this fight, I think it’ll be time for him to [permanently] step up to light heavyweight and take on somebody that is going to fight him back.”

Merchant ended the interview by touching on TMT promotions and the potential for success. I mentioned the roster 50-Cent has put together as well as some of the rumored fighters he and Mayweather are looking to acquire and whether or not they have the ability to make an immediate impact.

“Immediately speaking none of those fighters are guys who excite the world — the fans — but some of them are good fighters, it’s a start. When Golden Boy started they started by signing veterans like Hopkins, Mosley, Barrera, and Marquez and that gave them entrée and then they built up an infrastructure and got younger fighters and so on.

“There are all kinds of paths to the same goal, both of these guys have made a lot of money and if they want to invest in boxing that’s good. If they can excite the Mayweather fan base, the African-American fans that are looking for stars to root for and they have the promotional know how and want to get into it in a serious way then I’m as curious as the next fellow. It’s not as easy as it looks, but maybe they can pull it off,” Merchant said.

Oscar De La Hoya found initial success with Golden Boy by using himself as a bargaining chip of sorts, in order to garner television dates. I asked Larry if he felt Mayweather would do the same and if that gave some insight into Floyd’s plans to continue his fighting career.

“I think that’s part of the way they’re going to start. Maybe the good news is [Mayweather] will fight a little more often for that reason. I think he was going to continue to fight anyway, how much more he fights or has to fight in order to keep the promotional company going that’s something that remains to be seen.

“I don’t know that they’re going to make money from day one if they’re investing all of this money into the game, but they have the kind of money and it depends if they have the same power whether they make an impact,” Merchant said.

Many assume that because 50-Cent is an entertainment mogul and Floyd Mayweather Jr. is at the top of the boxing food chain that it will instantly translate into promotional success. I’m not so sure. They are going to have to use their personalities in combination with smart business. I think that TMT Promotions could be a power house, but it won’t be because of Floyd’s 2.4 PPV buys and 50-Cent’s multi-platinum record Get Rich or Die Tryin’, it will be because they made the right moves at the right times and practiced good business all the way through.

We all know Lil Wayne is talented, but how much success would he find if he went into the restaurant business? Whatever kind of crossover success people find, it is only possible because they used the same intelligent maneuvering in both ventures and not necessarily because they relied on one venture to fully support the other.