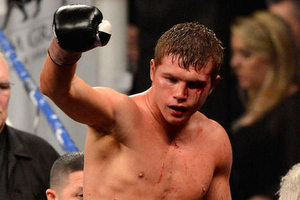 If you’ve ever tuned in, called in, or made yourself available on Twitter during Thaboxingvoice.com’s radio show, then you’re well aware of our debates on issues surrounding the sport, specifically the subject of Canelo-Trout. We’ve spent many shows speaking on the facts and implications surrounding Saul “Canelo” Alvarez and Austin Trout, even when the subject wasn’t on our format clock it seemed to inevitably make its way onto the platform. Those shows have provided some of the most spirited and enthusiastic debates in the show’s history and in turn the debates enraged callers into the kind of frenzies that have carried over into private conversations amongst each other.

If you’re unaware with the semantics of the debate then I can sum it up. Essentially the debate comes down to our most brightest and enlightened panelists and callers (shout out Jose) arguing the fact that Canelo is on target for an eventual breakthrough, culminating with a win over the best possible opponent. While admitting that he has fought lackluster competition, this group does not neglect the fact that Alvarez had no amateur background and entered the boxing world with an incredible learning curve.

The opposite side of the debate is made up of Canelo detractors, with a few Trout true believers in the mix. Their contention is that Canelo hasn’t beaten anyone of worth and because Trout beat a small Cotto then he is better by default. They’ll say that Trout is built to beat a guy like Canelo, but the truth is most of the arguments I’ve heard have been vague and hypocritical (Nes). It isn’t that I disagree about Trout being a standout fighter and I would even be willing to admit he could be victorious in a fight against Canelo, but it’s just not how I see it going.

The “who wins?” debate got even more interesting when legendary analyst Larry Merchant stopped by the show and weighed in on Canelo as the future of boxing and whether he deserves a pass on his resume to this point.

“There are guys that come along once in a while who have star quality and that’s much rarer than being a champion, especially today when everybody is a champion or interim champion or super champion. Superstars, guys who are big attractions and enormous attractions in [Canelo’s] case in Mexico, are rare and they can write their own rules in a sense and the fact is he’s young. We first saw him at age 19 and people were saying ‘who’s he fought.’

“My metaphor that I used was: look at him as a gorgeous young starlet, we don’t know if he’s going to develop into Meryl Streep, but he sure is gorgeous right now. And he’s gorgeous now in terms of how he fights the guys he’s fought,” Merchant said.

Merchant broke down what he liked about Canelo specifically, but admitted that he leaves some things to the imagination.

“[Canelo’s] smart, he has a real ring sense; he goes from offense to defense and defense to offense very slickly and smartly. I like him, but we haven’t seen him fight one of the 2 or 3 top guys. I think obviously if Cotto had beaten Trout [then Canelo] would’ve fought Cotto because Cotto has a style that would enable him to function at his best, which isn’t to say he’d automatically win.”

I agree with Merchant because the Cotto scenario raises interesting decisions. For instance, Trout gets credit for his win over Cotto (and deservedly so), but if Canelo fights Cotto next these critics have made it clear they won’t be impressed and would see Canelo with the same meager outlook. I agree, but can we say that Trout was a beneficiary of good timing because had Canelo got Cotto first then it would be Canelo with all the praise and Trout without an opportunity to secure his reputation against Cotto.

Merchant then spoke directly about his thoughts on Canelo and Trout as a proposed matchup, specifically whether it’s worth exploring as an option and if the fight is even a realistic possibility.

“Against a slick guy like Trout and a good boxer, I don’t know if the fight is big enough yet and I think it’s obvious that they’re hoping to build towards a Mayweather fight that would be a big attraction. So I hope he fights somebody who can test him, but if I was managing him I certainly wouldn’t put him in with a slick left-handed fighter no matter how many titles he had at this stage with his promise. But as a fan, yeah I’d like to see him fight the best guys out there.

“I think he beats Trout, but thinking it and seeing it happen is two different things and maybe we’ll all say that his management should be sued for criminal negligence if they put him in with a guy like that who would outpoint him,” Merchant said.

If you go back and watch the Merchant portion of the interview on Thaboxingvoice’s YouTube channel you’ll notice a classic expression on the face of Nes caused by Merchant’s Canelo pick. Nes, being the outspoken host he is, couldn’t resists debating Merchant on the topic. He brought up one of his usual points about Canelo looking “vulnerable” against what he calls weaker opposition. Merchant returned fire with a speech on the misconception of vulnerability in a fighter in the fight game.

“All fighters are vulnerable, especially if they’re fighting, but at the end of the day he’s beaten everybody they’ve put in front of him and he’s beaten them decisively. I still like what I see. A lot of guys have been vulnerable who’ve been great fighters, and if you fight the best fighters out there everybody is vulnerable ultimately.

“I see it in a larger context and I think soon enough we’ll find out how good he is, but for that matter why don’t we say Mayweather should fight Trout, I don’t hear anybody saying make Mayweather and Trout. If Mayweather isn’t eager to fight Trout then why should we rush Alvarez to fight Trout?”

I wouldn’t suggest that Merchant is correct simply because he is Larry Merchant, but my perceptions of his views are based on their validity and for that alone I agree, in fact his words merely echoed my original argument.