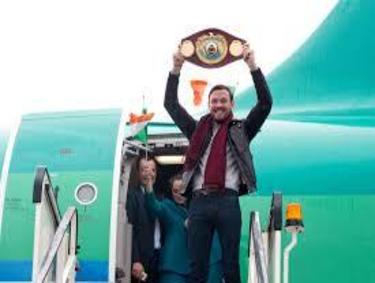 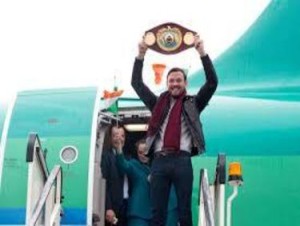 Thomond Park in Limerick, Ireland will be bursting at the seams in welcome to a returning son on September 19th, when WBO World middleweight champion Andy Lee (34-2-1, 24 KO’s) defends his title against mandatory challenger Billy Joe Saunders (22-0, 12 KO’s).

The Irishman Lee struck out westward to the United States when he began his professional campaign and has made the majority of his appearances there, with the exception for a period between 2007 and 2010 when he returned home during the intermediate stage of his career.

Lee trained under the late Emmanuel Steward until his passing, moving on to settle beneath the wing of the cerebral Adam Booth for what has turned out to be the most lucrative period of his career so far, where he remains.

A split decision draw last time out against former champion Peter Quillin -in which he had to climb off the canvas twice- may mislead one to believing Lee is lucky to still be wearing his belt. But in truth, that showing was typical of his last twelve months between the ropes; coming back from early deficits to claim positive results.

He did so in his KO victory against John Jackson when he was downed early again, and in winning the vacant belt against Matt Korobov whom Lee trailed on the cards before getting the stoppage. He deflected Quillin’s challenge as the underdog in what turned out to be a tense affair in his first title defence to round off a stellar year.

He was a seasoned pro before his reign began and has been weathered further by the stiff competition near the top end of the 160 lb. division.

In an interview with iFL TV Lee said he feels this advantage in experience will hold him in good stead against his young challenger, who in Lee’s estimation deserves the position he has found himself in.

“This is nothing new to me I’ve seen it all before but for him it is something new, and that could be the difference in the fight.”

His tune-up against Yoann Bloyer, last weekend notwithstanding Saunders, has been inactive since November last year when he took Eubank Jr’s unbeaten record, whereas Lee has been in with both Korobov and Quillin in that time. Consequently, the champion will come into this one with more momentum out of the two.

Aside from continuing his championship rule in good fashion, Lee feels he is paying back some of the good faith his compatriots have shown him by bringing a big fight back to the Emerald Isles, a region starved for so many years in this regard.

“It will be a special event. I’ve fought all over the world, and it’s a chance to come home and show the people of Limerick and Ireland my gratitude for all the support they’ve given me. And we’ve got a real fight; a genuine middleweight title fight that if it was anywhere else in the world it would be watched by thousands of people.”

This is a competitive, pick ‘em contest, which is more than can be said about many a world title fight these days; two southpaws, Saunders with the silkier skills and Lee with the heavier dig, both have proven themselves as durable.