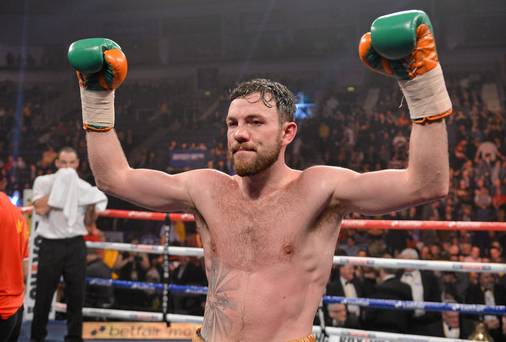 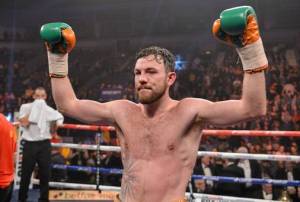 Irish world-title hopeful Andy Lee is open to setting up a blockbuster battle with rising British middleweight star Billy Joe Saunders should he prevail this weekend.

The 30-year-old southpaw takes on Matt Korobov for the vacant WBO belt at the Cosmopolitan in Las Vegas, live and exclusive on BoxNation, and is aware that if he wins he must fight undefeated Saunders – who won the WBO eliminator contest against Chris Eubank Jr. last month – next up.

Saunders looked impressive in his recent win over Chris Eubank Jr., overcoming the exciting ace when he scored a split points victory to continue his march towards a world title shot.

That performance impressed Lee, who dreams of facing-off with the 25-year-old Saunders in front of his adoring Irish fans.

“Experience was key [in the Saunders-Eubank Jr fight]. Billy Joe knew what to do, he’d been there before and he kind of shut him down for the first six rounds.

“Then it was always going to be uphill for Eubank. To give away the first six rounds was almost suicide really,” he said.

Before he can look too far ahead Lee has the impending task of beating the undefeated and decorated amateur Korobov.In his previous world title bid at light-middleweight he came up short as he was stopped in the seventh round against the bigger Julio Cesar Chavez Jr.

Now though, the pupil of the late Emmanuel Steward has linked up with trainer Adam Booth and believes that this time around his hunt to become a world champion will end successfully.

“Adam Booth had always been a trainer who’d stood out for me so I got a meeting organised. He’s turned me into a far more 3D fighter whereas previously I would only box long. Adam has also helped change me physically; transformed me into a better conditioned and more athletic fighter,” said Lee.

“But going through such an experience builds strength of character and makes you a better man in the long term. Matt Korobov is far more of a technical fighter than Chavez. I’m anticipating a boxing match, as opposed to a slug out.

“Obviously he achieved great things in the amateur game but he’s never been anywhere near this level during his six years as a pro. He’s not fought opposition anywhere close to the standard that I’ve been facing and beating. I intend to expose that on Saturday night,” he said.

The headline attraction on the big BoxNation bill on Saturday night will be Tim Bradley against Argentine Diego Chaves.

Welterweight star Bradley is looking to bounce back following his first loss but will have his work cut out against the hard-hitting Chaves who is also aiming to gain some momentum following his disqualification to Brandon Rios.

Plus further good news for BoxNation subscribers comes with the news that the channel is set air the epic trilogy between Rios and Mike Alvarado on January 24th.

The clash is one of this era’s most intense and exciting boxing rivalries and their previous two scraps have been among the most thrilling in recent times.

“This is going to be like our wars in fight number one and fight number two. We are two warriors. We will go into the middle of the ring and mix it up. For me, all of this is for one thing – redemption,” said Alvarado.

“If Alvarado wants to go the centre of the ring and trade, he will feel my power right away,” responded Rios. “A few of my big punches and he will change his game plan. That’s when I hunt him down, win the fight.”