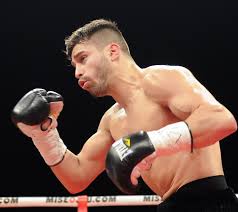 David Lemieux (33-2, 31 KOs) certainly stamped his name in the middleweight division after his stellar performance against the very determined Gabriel Rosado (21-9,  13 KOs).

In the first stages of the fight Rosado began fighting a very measured fight against the hard hitting Lemeiux. He consistently used lateral movement, and maintained his high guard. Then in the 3rd round, Lemieux landed a big left hand that staggered Rosado that caused immediate swelling in Rosado’s left eye. Lemieux continued his attack and forced Rosado to the canvass, scoring the knockdown. Rosado managed to survive the round, and regained his energy the very next round.

In the 4th round Lemieux continued throwing big shots, but Rosado took them well and returned the favor. It was a back and forth action and Rosado urged Lemeiux to continue coming forward. As the fight progressed Lemieux did continue to come forward with his consistent powerful punching attack. Rosado was not countering enough to cause Lemieux to hesitate while closing the distance. Lemieux comfortably controlled the pace of the fight, while Rosado at times would have his moments in spurts, but Lemieux just looked like the much physically stronger fighter in the ring.

In the 8th round Lemieux began slowing down his offensive output, and Rosado took advantage of this. Rosado consistently peppered him with shots, and the tide began to turn. As soon as the round ended, Lemieux’s corner urged him to not allow Rosado to regain momentum in the fight. Lemieux listened to his corner and overwhelmed Rosado in the next two rounds.

In the 10th round Rosado seemed to be in survival mode as Lemieux really pressed the attack. The doctor decided to stop the fight due to the high amount of swelling around Rosado’s left eye, and the fact that Rosado seemed on the verge of being knocked out.

After the fight Rosado claimed Lemieux is definitely among the top fighters in the division, but felt the swelling in his left eye effected him throughout the entire fight. He claimed he had a very difficult time seeing out of the eye, which resulted his inability to counter as effectively as he wanted too.

In Lemieux’s post fight interview he was asked who he wants to face next. Lemieux without any hesitation stated he wants to fight the top fighters in his division. He’d called out, Gennady Golovkin, Peter Quillin, and Miguel Cotto. Lemieux expressed he’s not afraid of anyone, and given his power punching fan friendly style, fight fans would probably not mind seeing Lemieux against any of these fighters in the immediate future.