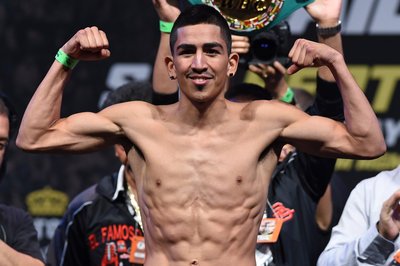 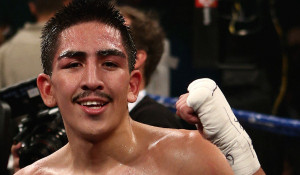 The Jan. 17 “Return To Glory” fight card co-promoted by Don King Productions and Golden Boy Promotions is highlighted by a heavy-duty main-event matchup that has stirred the interest of even the most casual sports fan — dangerous defending WBC Heavyweight World Champion Bermane “B. Ware” Stiverne (24-1-1, 21 KOs), of Las Vegas by way of Haiti, against unbeaten mandatory challenger Deontay “The Bronze Bomber” Wilder (32-0, 32 KOs) of Tuscaloosa, Ala.

“2015 is going to be a huge year for boxing and Golden Boy’s opening act in Las Vegas will get things started with a bang,” said Oscar De La Hoya, Founder and President of Golden Boy Promotions.

“In addition to Deontay Wilder looking to bring a heavyweight title back to America for the first time in a decade, longtime favorite Leo Santa Cruz and rising star Fidel Maldonado Jr. — electric fighters with significant power — will both appear in separate fights on the undercard, giving boxing fans a chance to see three top stars in action on a single card.”

Before stepping up a notch in weight, Santa Cruz was the IBF Bantamweight World Champion, winning that belt in June 2012 and making three defenses. An excellent body puncher who is at his best when he keeps up a relentless pace, pressures his opponents and wears them down, Santa Cruz is 7-0 with three knockouts in world title fights.

Santa Cruz, who’s as personable and courteous outside the ring as he is ferocious and determined inside, said, “I feel great about my upcoming fight with Ruiz. He is a strong fighter, undefeated in the past two years and the kind of opponent I want to fight.”

“I want to put on a great show on Jan. 17,” Santa Cruz continued. “And show boxing fans that I am a strong fighter ready to go to the next level and take on the top, tough fighters in the division: Guillermo Rigondeaux, Scott Quigg, Carl Frampton and Abner Mares.”

Jesus Ruiz of, Nogales, Sonora, Mexico, retired his amateur status at the tender age of 16. He has won five in a row, including a clear 10-round decision in perhaps a career-best performance over Leonilo “Veneno” Miranda (36-7, 33 KOs) in his most recent start on Nov. 7, 2014.

A professional since November of 2006, the 25-year-old Ruiz will be getting the opportunity of a lifetime in just his third start in the United States (and third outside of Mexico). He won a lopsided eight-round decision over Enrique “Cuate” Quevedo (16-7-1, 10 KOs) on Aug. 24, 2013, in Cabazon, Calif., after losing his U.S. debut on an upset split decision in Tucson, Ariz., in July of 2008.

“I want thank Golden Boy Promotions and SHOWTIME for this great opportunity to fight for the world title,” said Ruiz. “I know many believe I have no chance, but I am well prepared and ready to give my all. I am ready for war and ready to leave it all in the ring like a true Mexican warrior.”

Like the heavyweights in the main event, Albany, New York native, Amir Imam (pronounced “EE-mom”) and Fidel Maldonado Jr., of Albuquerque, New Mexico, are not accustomed to putting in a full night’s work. Between them they have gone the distance only six times in a combined 37 fights.

“This is by far the biggest fight of my career and I’ve got to show the world what I’ve got,” Imam said. “I know that Maldonado is a southpaw and he comes forward and throws a lot of punches. I plan on boxing the kid for 10 rounds, but if the opportunity for a KO comes then I will go get it. I’m not letting anyone take this opportunity away from me. I have worked too hard for it.”
“Maldonado had a great amateur background, he’s very smart and he’s a very good fighter. It’s going to be a great fight,” said Imam’s head trainer Stacey McKinley. “Maldonado’s fought a better class of fighters than Amir but never fought a fighter like Amir and most have not. He’s not strong enough for Amir and Amir will walk straight through him. Amir will be Don King’s next superstar.”

Imam, an amateur standout and silver medalist at the 2011 U.S. Olympic Trials, “doesn’t get paid for overtime” in the professional ranks as 11 of his fights ended in rounds one or two.

The 24-year-old has steadily improved as his professional career has progressed and is 2-0 on ShoBox: The New Generation. In what was expected to be his toughest test, Imam knocked out Jeremy “Hollywood” Bryan (17-5, 7 KOs) in the second round of his ShoBox debut on April 12, 2013.

Since the Bryan blowout, Imam’s taken a big step up in competition, most notably in his last three fights, beginning with a fourth-round stoppage of then-undefeated Jared “The Quiet Storm” Robinson (14-0) on Feb. 21, 2014, in Cleveland on ShoBox; the following May 10 on a unanimous eight-round decision over Yordenis Ugas (15-3, 7 KOs) (it was Imam’s first fight to go the distance since his pro debut in November 2011); and most recently, last Dec. 13 when he stopped Santos “El Toro” Benavides (23-6-2, 17 KOs) in the sixth round.

Maldonado Jr., 23, is a tough, hard-nosed, aggressive-minded left-hander who’d won six straight, five by knockout, before his last outing ended in a third round no contest against Fernando “Picapiedra” Silva on Dec. 20, 2014, in Cancun, Mexico.

“I have been training hard since my last fight against Fernando Silva, and have had no time off,” said Maldonado Jr. “I am ready to get the job done, and I hope he is ready. My goal is to show fans that I can put on a great show, step up the competition and get ready for a title match one fight at a time.”

The NC stopped some of the momentum Maldonado Jr. had regained in the previous 18 months, since suffering his second pro loss on a disputed 10-round split decision to fellow prospect Michael “The Artist” Perez (21-1-2, 10 KOs) on Aug. 24, 2012, on ShoBox in Indio, Calif. Maldonado Jr. was out-boxed and clearly behind on points early but rallied to floor and hurt Perez badly with the last punch of the hotly contested fight in which Maldonado Jr. felt he was robbed.