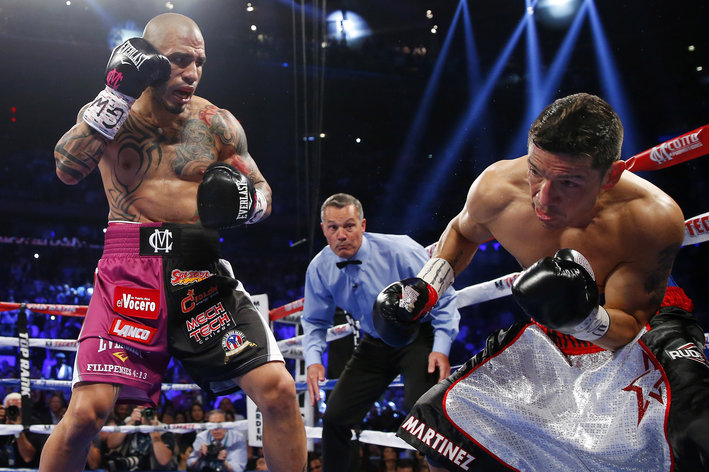 After a two month hiatus from the boxing scene; I am happy to report, that I am back, refreshed, refocused and reenergized. I finally have the opportunity to get back to writing and covering the sport that I love. This will be a multi part article covering a multitude of subjects.

So let’s get right into it, I have a couple of topics in mind to start. We will recap the year so far; go over the great, not so great. but all around memorable moments, of 2014. We will also talk a little business (in part II), because it is important and interesting, in addition we will cover and analyze some of upcoming fights and possible match ups (in part III).

In my opinion credit for the best performance and the greatest boxing moment of the year has to go to Miguel Cotto. What he did to Sergio Martinez was masterful and unique. The technique, power, speed and timing were simply a few notches above Sergio’s that night. I was shocked by the results myself. Miguel had just destroyed the lineal middle weight champion of the world, with ease, unbelievable.

I will admit that I picked Sergio Martinez to win the fight easily. I skipped the fight at MSG, something I never do. I felt that it was a mismatch, that Martinez would do to Cotto what Cotto some how, managed to do to him, destroy him easily! This is boxing and they don’t call it the theater of the unexpected, for nothing.

Then you have Saul “Canelo” Alvarez! This young man is fighting top notch guys like Lara, against the advice of his team. He has already headlined two Pay Per View events this year. At the tender age of twenty four he keeps getting them W’s against top opposition.

I felt he did enough to win and my card was 7 rounds to 5 for Canelo. Thought he won the 2nd, 4th, 6th, 7th, 8th, 9th and 12th rounds; for those who care about score cards. That’s just how I saw it, if you don’t agree, that’s fine you have a right to your opinion. He has positioned himself and is poised to take the mantle from Mayweather and Pacquiao once they retire in the near future.

Then you have the knock out of Paulie Malignaggi at the hands of the surging Shawn Porter. Great moment for Porter, not so much for Paulie, it was memorable none the less. No body in boxing is more accessible, polite and genuine than Mr. Paulie Malignaggi. That was sad for many of us to watch.

Danny Garcia……I traveled all the way to Puerto Rico to celebrate his so called “homecoming”. Although it was a commercial success, with many of us going to Puerto Rico to watch it live, support or cover the event, it was a huge disaster for the Danny Garcia brand (DSG), because Mauricio Herrera made Danny look terrible and busted him up in the process. Now he is fighting “Lightning” Rod Salka? For those that don’t know he is light weight who Danny is forcing to fight at 142lbs.

Last but not least, Marcos Maidana gave Floyd Mayweather a run for his money for once, and that was good to see. They are actually doing it again in September, and you have to give Floyd Mayweather credit for taking the rematch. It was an extremely tough fight, the first time. If he comes out and dominates him, like he did Jose Luis Castillo in the second fight. That would be epic! You can’t put it past Floyd “Money” Mayweather. Stay tuned…….