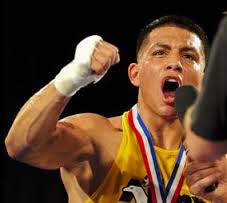 Opening up the night in a four-round super-flyweight bout, Joshua Franco, also from San Antonio, Texas, will take on Julio Rodriguez (0-1) of Ensenada, Baja California, Mexico.

Tickets starting $20 are on sale now and are available for purchase online at www.goldenboypromotions.comor by visiting the Golden Boy Promotions Facebook page. For ticket information, email us at [email protected]

The “Knockout Experience VIP Package” is also available for an additional $25 upgrade and includes VIP entrance, access to an exclusive lounge offering food and beverages for purchase; a meet and greet opportunity with fighters and celebrities attending the event; an automatic entry into the LA Fight Club grand prize drawing, which can include but is not limited to: autograph gloves, picture in the ring, backstage access, tour of locker rooms, fighter ring walk, tickets to upcoming boxing events and additional merchandise and prizes.

Unbeaten in 19 professional fights, La Puente, Calif.’s Abraham “Chamaco” Lopez wants to start making his move to the elite level at 126 pounds and despite a draw against Juan Carlos Martinez in March, the 27-year-old’s fifth-round knockout of 1996 Ghanian Olympian Alfred Tetteh in May proved that he’s ready for that next step. The owner of wins over Gabriel Tolmajyan and Aaron Garcia, Lopez is looking forward to his next challenge against Jorge Diaz.

Hailing from New Brunswick, New Jersey, Jorge “King” Diaz is looking to start off 2015 of the right track with a win under his belt. The fighter most recently faced Luis Rosa, Ramon Ellis, and Jose Haro in 2014. A professional since 2007, Diaz remained busy and kept up his undefeated status until 2010. He is hoping to get back on track in this new chapter of his career when he takes on the undefeated Los Angeles native, Abraham Lopez.

Popular East LA prospect Roy “Pitbull” Tapia made his first LA Fight Club appearance in March 2015, winning a hard-fought decision over Ali Gonzalez that kept his unbeaten record intact. On August 6, the 23-year-old super-bantamweight wants to start a new knockout streak and he promises that Juan Hernandez will be in for a rough battle.

With almost ten years as a professional boxer, Juan Hernandez of Tijuana, Baja California Mexico, will be looking to add another win to his record this year when he faces Roy Tapia of East Los Angeles. In 2014, he faced Pedro Palma in November and Genesis Servania in February of 2015 going the distance in both matches. Making his second appearance at LA Fight Club after taking on Joseph Diaz on March 6 of this year, the fighter has since then fought and defeated Jorge Sillas via unanimous decision on May 7.

Hector “El Finito” Tanajara from San Antonio has been fighting since 2007 and during that time, he has won eight national championships. In 2012, he qualified to attend the Veles Cup in Kurgan, Russia and took the gold medal in his weight class. This opportunity led the amateur standout to qualify for the 2016 USA Pre-Olympic trail competition. Winning the tournament and having been selected as one of seven to go to the 2016 Olympic trails, Tanajara decided instead to focus on a professional career. Now, the eight-time national champion will make his much-anticipated professional debut on August 6 as a newly signed Golden Boy fighter.

Hailing from East Los Angeles, Jonathan Navarro is a boxing legacy looking to make an impression on his professional debut on the August 6 edition of LA Fight Club. The nineteen-year-old, whose uncle Jose Navarro was a 2000 U.S. Olympian and a flyweight title challenger in his professional career, has a decorated amateur career winning gold in 15 tournaments, four of which were international while representing the U.S. on the national team. A gifted boxer who began his boxing career at seven-years-old, Navarro won his first Golden Gloves at nine years of age. Now with tournaments and numerous awards under his belt, he is ready to make his mark as a professional boxer.

Francisco Ochoa, of South Los Angeles, is a new fighter looking to make his mark in the professional boxing scene. Ochoa made an impressive professional debut on March 27, 2015, after dominating opponent Misael Chacon at Quiet Cannon in Montebello, Calif.

Ochoa, who was born in Mexico, trains out of the New Generation Boxing Academy in Lynwood, Calif. He began boxing at age seven, following in the footsteps of his three older brothers. On August 6, Ochoa will look to continue his winning streak in his second professional bout at LA Fight Club.

Pablo Rubio, from Whittier, Calif., made his professional debut on the June 4 edition of LA Fight Club boasting a win against Julio Rodriguez. Previously, Rubio fought in the 2014 USA Boxing Junior and Youth Open in the youth lightweight class at 123 lbs., and has sparred with the likes of undefeated professional boxer Leo Santa Cruz. On August 6, Rubio is determined to continue his strong start to his professional career and a name for himself with a second win against his opponent.

Martin Regalado of Los Angeles is set to make his professional debut at The Belasco Theater on August 6 as he faces Pablo Rubio in his first pro four-round bantamweight bout.

Hailing from San Antonio, Joshua Franco is also set to make his professional debut as a new Golden Boy fighter. Franco boasts an impressive amateur career winning the silver medal at the 2015 USA Boxing World Series of Boxing and World Team Trials in Chattanooga, Tennessee, as well as was invited to participate in the Pan American Games in Toronto, Canada this month.

Julio Rodriguez returns to LA Fight Club since his debut on June 4 where he faced a tough opponent in Pablo Rubio. Rodriguez will return to the Belasco Theater looking for redemption as he fights Joshua Franco in a four-round flyweight bout.