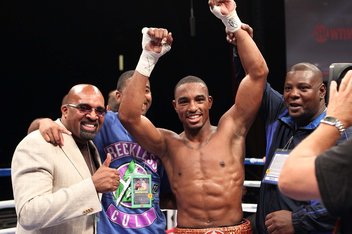 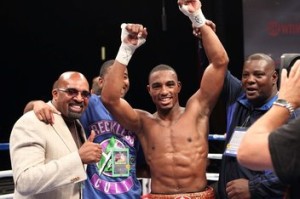 Tonight, ShoBox “The New Generation” will feature a card with the return of Badou Jack, who was last seen in February and stablemate, J’leon Love. Jack was knocked out in a stunning upset by Derek Edwards in just one round when they met back in February. His opponent for his return will be Jason Escalera. Love will be coming off a tough competitive fight with Marco Antonio Periban on the May 3rd card that was headlined by Floyd Mayweather and Marcos Maidana. After being dropped once in the fight and on the verge of being stopped, Love came back and earned a hard fought decision win over the veteran. His opponent, Rogelio Medina, is a familiar face for the TMT duo as he was knocked out by Jack back in December of last year, but he should not be taken lightly. The bout will be a 10 round main event, as Badou Jack will serve as the co-feature. In the opening bout undefeated fighter Ronald Gavril will face Thomas Falowo.

As far as the game plan for the fight, the undefeated, but untested fighter said, “We’ve been working on a few things, trying to work on my jab. This should be a good matchup for me. They tell me this guy likes to stand there and trade and that’s what we’ll give him.”

His opponent prepared just as well, having done sparring with former super middleweight champion Sakio Bika. “Sparring with Sakio Bika was a great experience. He can definitely crack. That was definitely some grade-A work right there.” Both guys seem comfortable with the kind of fight this could turn out to be, as both acknowledge each others styles. “This is a good matchup for me. I like the fact that he seems to come forward. I definitely think it’s going to make for a fan-friendly fight.”

“I’m just very grateful for this opportunity. The timing couldn’t be better. I’ve been feeling like I’m at my peak right now. Between the training camp and how much I’ve improved over the past couple of months and the past couple of fights, I’m ready. I understand that I’m going into this fight as the underdog, but by no means am I an opponent. I’m going in there and I’m coming out with that win. I’m ready to go,” said Falowo, who vows to prove that Gavril bit more than he can chew for this upcoming task.

Jason Escalera says this is where he is best at, this weight, the styles and even feels he can knock Badou out, to repeat what happened to him already. Escalera is undefeated at 168 and says he’s a whole different person at super middleweight. “Badou Jack was dropped in his last fight and I think that can be repeated if he makes the same mistake. The KO can be repeated again. I’m undefeated at 168 pounds. This is the weight for me, for my future. I’m like a whole different person fighting at super middleweight. I feel good and strong there.”

Although for Badou, this is the guy he should be focusing on, he expresses interest in a rematch with Edwards, who planted him face first when he stopped him in one round. “I want a rematch, I want to avenge my loss. I’ll do anything to get that fight made just for my pride. Other than my pride, that guy was nothing special. I want to be a world champion one day so I know I have to fight the best out there. My last fight was the most disappointing minute of my life. It wasn’t really a lucky punch, so I’m not making excuses, but he’s not on my level and I wasn’t supposed to lose. I threw a lazy jab and got caught, so it was my fault. He was lucky he landed it because I was just stupid.” But Jack still knows he has a tough opponent in front of him, who isn’t going to lie down for anyone. “This guy (Escalera) is tough and coming to fight so I’m going to be 100 percent ready for him.”

“It’s a great style matchup. I fight better when my opponents are brawlers. I like guys that come forward, confront me and fight. I’m not the type to run after fighters. We’re here to fight and that’s what we’ll do on Saturday. If he makes a mistake again he will get dropped with the same punch. I feel sharp, I feel good, I’m ready to rumble,” said Escalera who sounded more confident than ever.

Medina, who is from Mexico, says traveling to his opponent’s backyard for fights does not bother him. “I’ve been traveling to my opponents’ turf for my last few fights, but I don’t really care about that too much. It’s just the two fighters in the ring. There aren’t that many fighters in my weight division in Mexico so that’s why I have to fight on the road for the good opportunities.”  He also states he had no clue Jack and Love were sparring partners, but that won’t make a difference for Love. “I actually didn’t know that Jack and Love were sparring partners until recently, but every fight is different so I’m looking at this as another big opportunity for me.  If my opponent feels that just because I lost to Jack then he will have an easy night, then he’s in for a surprise.”

Jack, who fought Medina back in December, adds that Medina indeed is not an easy task and that Love should not take him for granted. “I told J, don’t sleep on Medina. He can punch and he’s very tough. He’s not the most skillful fighter, but he has 26 knockouts. He can punch hard and he definitely throws a lot of them. I told him to just be smart in there.”.

Medina is coming off a questionable loss to Johnathon Gonzalez, in which he felt distress at first, but since, says he is now past it and feels he performed well. His focus now is J’Leon Love. “In my last fight I went up against the local favorite, Jonathan Gonzalez. My team, the TV commentators, the fans in the stadium, they all thought I should have won the fight but they gave it to him by split decision. At first I was upset, but I know I gave it my all and put on a good fight. I think I won and now I’m just focused on my next fight.”

“My trainer and I have been watching a few of Love’s fights and have been working on some things in the gym that we can take advantage of.  I think Love was actually given too much time to recover from the knockdown against Periban. I know that he can be hurt and when I hurt him I plan to be more aggressive than Periban was. I need to take advantage of that.

As for Love, who saw the canvas in his last fight against Periban, he knows this is no walk in the park and reflects on his recent tough earned win. “My last fight was definitely a learning experience. Periban was a title contender and a very experienced fighter. I faced some adversity and I was able to bounce back and come through with a win. Badou isn’t just a training partner; he’s like a brother to me. He told me I can’t take Medina lightly, he told me to be careful because this guy can put you down. He’s tough, he’s going to bring it and I have to stay sharp.”

Love, like many other fighters who face adversity in their fights, learn from their mistakes and always look to execute better game plans for their future fights. “Every fight is a learning experience, but this one was under the big lights. It shows I have the heart and determination to win. I know where I want to go with this and I know a world championship is on the horizon. I think I have maybe two more fights before I fight for a belt. I’m still growing as a fighter, but I’ve graduated from prospect to contender and I’m just a few wins away from graduating to world champion. Saturday night is just another step. I think I’m almost there.”