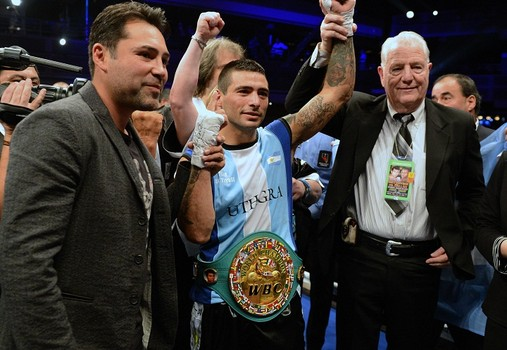 Lucas Matthysse’s one punch, one round destruction of Mike Dallas Jr. was amazing, but did not come without controversy or questions. The first issue was raised when the trainer of Mike Dallas Jr., Virgil Hunter, had opposed to the taking of amino acids by Matthysse before the fight. The results of the post fight drug tests were negative. Matthysse stands firm that no matter what Hunter thinks, he is a clean fighter, and feels Hunter was just trying to get under his skin.

“It was all a plan, head games, what I took was vitamins. Virgil Hunter was inside the dressing room when I was taking them. Everything was fine; it was basically Virgil trying to make me nervous,” Matthysse explained to ThaBoxingVoice.com

The other hot topic was the unofficial weight on fight night. According to the Showtime unofficial scales, he weighed in at 163 lbs, something out of the ordinary for Matthysse, who has weighed between 151 and 153 for his last 3 fights. When the questions was poised for the big re-hydration and if there was any issue with him making the 140 lb Jr. Welterweight limit, Matthysse was surprised and stated, “No I didn’t weigh 163lbs; I weighed 153 lbs on fight night. There’s no trouble making weight. I ate well the day before the weigh in, and I make weight comfortably.”

Matthysse has become sort of a cult to the hardcore fan. Being from Argentina and coming to America without much of a fan base, Matthysse has exploded into the scene making a name for himself with his style of boxing. Because of this sort of following, his name has been mentioned with the top names and soon it will come to a point where the names of his division can no longer avoid him. Matthysse is appreciative and feels that will help push him into the limelight.

“I didn’t think I was going to get this hardcore following and obviously it makes me very happy that I’m being accepted by the boxing fanatics. The last fight definitely helped me being that a lot of people in Argentina saw this fight. I feel I need to keep making that type of fights that I’ve done already, so my performances speak to themselves to get the big fights. We were waiting for the Garcia-Judah fight in February but since it’s postponed so we’ll see when we come back and we’ll see if it’s a big fight.”

On top of being avoided by the big names, Matthysse is also at the mercy of the Top Rank Golden Boy cold war. Most fans would salivate at a fight between Matthysse and Brandon Rios who is a Top Rank fighter. While we may never see that fight fruition, the two have sparred beforehand.

Matthysse commented on the fight and the session stating, “Yes Brandon Rios is a good fight, I sparred with him before, he’s a very strong guy. I hope one day the promoters can make that fight happen for the sport. We sparred 2 times, 10 rounds, it was good work, but I think I got the better of him in those sparring sessions.”

For Full Audio of the interview click here: http://thaboxingvoice.cogito24.com/lucas-matthysse-willie-nelson-delvin-rodriguez-steve-kim-tha-boxingvoice-radio-t-v/9442