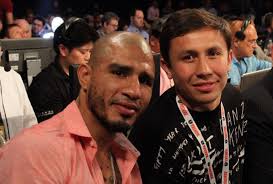 Former two-division champ and Showtime ringside commentator, Paulie Malignaggi took a moment to share some learned professional inside and outside of the ring. As a boxing insider, we asked his take on a possible matchup between his former opponent and newly appointed lineal champ, Miguel Cotto against long time middleweight boogeyman Gennady Golovkin- “It’s a good fight but I wonder if Cotto is a little small for the division,” says Malignaggi.

Cotto, who was a champion at lightweight before eventually moving up to 154, challenged Sergio Martinez, another undersized middleweight, for his title and won handily. “Golovkin is a pretty strong, more natural middleweight so you’d favor Golovkin for sure,” admits Malignaggi, but he stops short of completely ruling out the fight or the fighter. “Cotto has had a great career, you definitely can’t disrespect him, and it’s a fight that people will tune into watch… I favor Golovkin, but it’s a fight I would definitely tune in for.”

While Malignaggi may let Cotto off the hook for not wanting to face Golovkin, ThaBoxingVoice and our fans insist on seeing the best fight the best and titles unified. Cotto’s camp has made statements to the effect that they wouldn’t take a Golovkin fight because he is not a big enough draw to warrant a Cotto fight. We asked Malignaggi on this blatant sidestep by Cotto’s camp. “A lot of times, the best way to avoid a fight [for stars like Cotto] is to say that the guy is not a star,” he responds. “I get it; [Cotto’s camp] is not going to say [Golovkin] is too much of a risk for them… Cotto has a bigger fan base and got more fanfare than Golovkin, so he’s basically reaching back to take this fight. A lot of fighters don’t want to reach back if they take a risk, they want to reach up to take a risk,” explains Malignaggi, who empathizes with fighters wanting to raise their profile. “Cotto will probably want to fight Floyd in a rematch or Canelo. From that point I understand what Cotto is saying- it’s still a fight I would want to see though, ” laughs Malignaggi.

Reflecting on Cotto’s career, we asked Malignaggi if he would give Cotto a pass for not fighting Golovkin, “100 percent” answered Malignaggi immediately. “There is nothing wrong with not fighting everyone in your era… [Cotto] won a middleweight title and he’s not even a real middleweight, let’s give credit where credit is due,” empathizes Malignaggi. When Malignaggi explains the fighter’s perspective Cotto’s decision makes a bit more sense. A boxing fan will always want to see the best match-ups, but no fan can expect Cotto to take an incredibly risky fight against a lesser known opponent for almost no reason. “If he doesn’t fight Golovkin, I don’t blame him… I wouldn’t be chomping at the bit to fight him either,” Malignaggi says. After seeing Golovkin in the ring, who couldn’t relate to that?