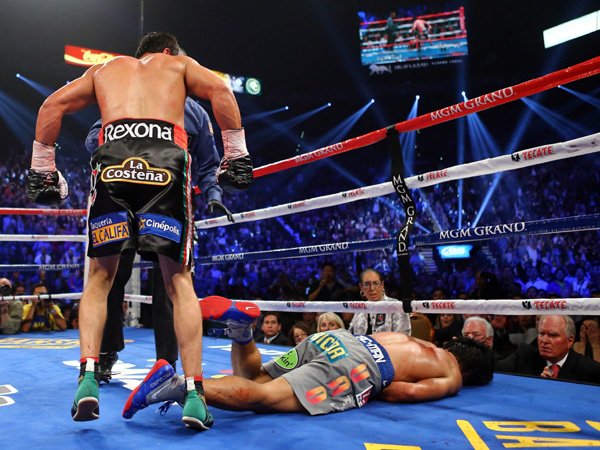 Following his knockout loss to Juan Manuel Marquez, Fighter of the Decade MANNY ”Pacman” PACQUIAO made a precautionary visit to University Medical Center.

“Manny was given a CT scan and the results were negative,” said Michael Koncz, Pacquiao’s advisor.  “We were in and out in just over an hour and Manny was in excellent spirits.”

Pacquiao returned to his penthouse suite in the hotel for a family dinner followed by a viewing of his fourth fight against Marquez.  As the DVD played, Pacquiao announced “Spoiler alert.  I don’t think you are going to like how this ends!”

Pacquiao then issued the following statement to his fans:

“First and foremost I would like to thank God for keeping Juan Manuel Márquez and me safe during our fight on Saturday night,” said Pacquiao.  “I want to congratulate Juan Manuel.  I have no excuses. It was a good fight and he deserved the victory.  I think boxing fans who watched us were winners too.

“To all my fans, I would like to thank you for your prayers and assure you that I am fine.  I am looking forward to a nice rest and then I will be back to fight.

“On behalf of Jinkee and our family we would like to wish everyone a joyous Christmas and a happy and healthy new year.”

The Pacquiao vs. Márquez 4 telecast was produced and distributed live by HBO Pay-Per-View® and available to more than 92 million pay-per-view homes. HBO Pay-Per-View, a division of Home Box Office, Inc., is the leading supplier of event programming to the pay-per-view industry. Follow HBO Boxing news at www.hbo.com and at www.facebook.com/hboboxing. Use the hashtag #PacMarquez to join the conversation on Twitter. For Pacquiao vs. Márquez updates, log on to www.toprank.com or www.hbo.com.