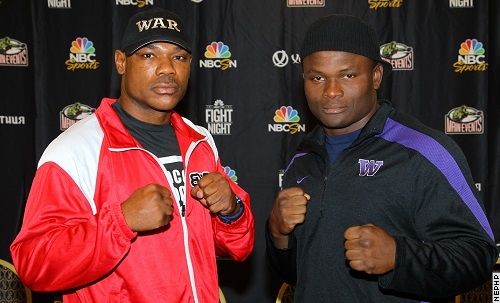 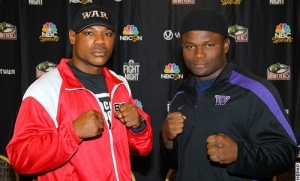 “Hardcore” Mansour is a Fight Night veteran, making his third appearance on the program. In his most recent appearance, he lost a hard fought battle to Steve “USS” Cunningham on April 4 in front of his hometown crowd at the Liacouras Center in Philadelphia, Penn.

When asked about making his third appearance on Fight Night,the 42-year old Southpaw laughed, “I hope that it means NBC likes me.” He added, “We have a very large following in the (Philadelphia) tri-state area so it’s important to me that all the fans can watch. We have a lot of new fans as a result of my last fight with Steve and my first fight against Kelvin Price. We’re very happy to be back on NBCSN Fight Night.”

Mansour’s opponent, Fred Kassi, a Douala, Cameroon native, will make his Fight Night debut on Saturday. The 35-year-old has won his last three fights (two by knockout) in his adopted hometown of New Orleans, La.

“I’m very excited to be on Fight Night,” said Kassi. “Amir talks about how no one wants to fight him; I do – without hesitation. Fight Night is the perfect showcase because Fight Night fans understand boxing, and I’m going to put on a clinic. We’re training specifically for Amir’s hard swinging style. Bring it on, power doesn’t matter much if he can’t hit me. If he changes up and doesn’t bring the power and tries to box with me…he won’t last. Either way, we’re ready. ForFight Night fans who don’t know me now, they will after Nov. 8.”

Undefeated Russian welterweight contender Dmitry Mikhaylenko made his U.S. debut in his last fight, defeating Sechew Powell via unanimous decision in August. This will be his Fight Night debut.

“I am very excited to make my debut on American television,” said Mikhaylenko. “It has always been a dream of mine, and I thank Main Events and NBCSN for this opportunity.”

Facing off against Mikhaylenko is Puerto Rican Ronald Cruz, who lives in Bethlehem, Penn. This will be his ninth fight at Sands, where Cruz always has hometown support in the crowd.

“I am happy to be back on NBCSN again and I am thankful for the opportunity to be able to showcase my style and my skills,” said Cruz. “Expect excitement because I am coming to win this fight.”

Russian light heavyweight sensation Vasily “The Professor” Lepikhin is a 29-year-old from Chelyabinsk, Russia. The Professor made his Fight Night debut back on Aug. 9 at Sands, with a fifth round TKO over New Zealand native Robert “The Butcher” Berridge, to secure the WBO Oriental and PABA light heavyweight titles.

The undefeated Lepikhin said, “I am very happy to be back fighting on NBCSNFight Night. I hope to put on another great fight for my fans.”

Lepikhin’s opponent is Brazilian Jackson “Demolidor” Junior, who knocked out Francisco Antonio Mora in the third round in his last fight. Junior will also make his Fight Night debut on Saturday.

The Brazilian Junior added, “Boxing is easy. The wait until the fight is much harder.”

Main Events CEO Kathy Duva said, “As always, we look forward to the return of fighters who have made an impression on Fight Night fans before, as Amir Mansour, Vasily Lepikhin and Ronald Cruz certainly did, and to introducing new faces. Our matchmakers put together an excellent triple header and it’s a great way to close out the Fight Night series.”