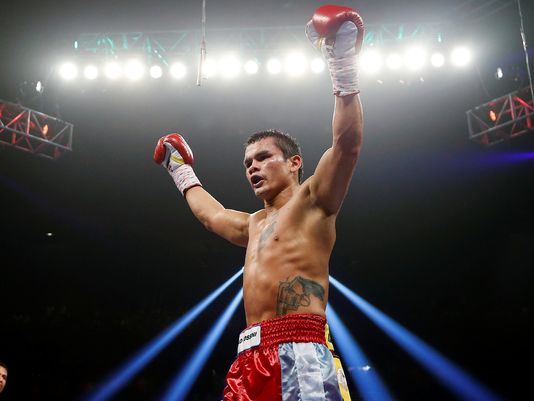 The June 8th edition of Showtime Boxing featured a broadcast that was headlined by welterweight knockout artists Marcos Maidana (34-3, 31 knockouts) versus Josesito Lopez (30-6, 1 ND, 18 knockouts). Going into the bout, many fans and media members alike were building the match-up as one that would be a surefire candidate for “Fight of the Year”. Although there’s no way it was “Fight of the Year”, there’s no denying that the six rounds of action shared by both fighters was all kinds of exciting.

In the first round of the bout it was interesting to see Maidana relying on a jab to set up power punches. Considering his reputation as one of the sport’s most vicious punchers, this reliance on technique over power seemed almost foreign to the “El Chino” we had all grown accustomed to seeing. With both Maidana and Lopez trying to get a sense of their opponent’s timing, it was Lopez who was able to land the first power punches of the bout. This immediately prompts Maidana to responds with his own booming hook which initiates a fierce, but brief, exchange by both fighters along the ropes.

With each passing round it was obvious that Lopez was the much more comfortable fighter when it came to “boxing”, and this was especially obvious to Maidana. This led to the emergence of the Maidana style of fighting that had made him so loved by fans, and feared by opponents in the first place. Maidana began coming forward and forced Lopez along the ropes. It was here that Maidana was able to do his best work as he ripped shots to both the head and body of Lopez. Although Lopez was able to circle out of the precarious position, it was obvious that Maidana was on to something.

With Lopez now especially aware of Maidana’s game plan, both fighters were forced to do most of their work in the center of the ring for the rounds that followed. These types of exchanges saw both fighters trade thudding blows, but was most remarkable was how Maidana was able to seemingly shake them off. No matter how hard he tried to avoid it, the fight would inevitably end up back on the ropes by rounds end. This allowed Maidana to steal rounds in a convincing manner while also doing monstrous amounts of damage to Lopez.

The damage eventually caught up to Lopez in the 6th round after Maidana managed to drop him in the first minute. Smelling blood, Maidana stalked his opponent around the ring and unloaded a volley of punches that all seemed to land flush before the ref finally stepped in to call an end to the fight.

For Maidana, this was the type of classic performance that will no doubt land him some of the biggest names in the welterweight division. For Lopez however, this loss marks the second consecutive loss in his career. There’s no telling where his career will go from here, but with the ability to cross over different weight classes there will no doubt be another big fight on the horizon.