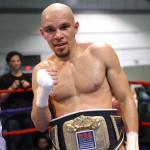 ThaBoxingVoice chatted with Leon Margules of Warriors Boxing Promotion after ESPN’s Friday Night Fights this week, wherein three of his fighters fought. “I thought the fights were good, I thought the people who came out had fun,” quipped Margules, while reflecting on a long night of boxing. Margules is charged with the not-so-easy task of bringing along several prospects and emerging contenders within his company. Broadcasts like ESPN FNF are perfect for developing the level of talent Margules is promoting, but as always in boxing, a loss can derail the whole career of a young fighter.

“[The fans] saw Mike Lee get tested and barley stay undefeated,” Margules says of his developing light heavyweight prospect. Lee, who squeaked out a decision in a 6 round fight against a slightly-above journeyman level opponent, is a hometown favorite and a potential asset for Warriors Production. His lack-luster performance on Friday represents the exact type of challenge that young prospects face- the pressure not only to win, but to look good.

Margules did have at least one fighter who did look good and won his fight- Middleweight Caleb Truax did just that against Derek Ennis. Truax showed good ring generalship and movement throughout the fight. At times, the two men traded and Truax again seemed to demonstrate some power as well as a decent chin.

Margules was obviously taken with Truax’s performance on that Friday night – “I think Caleb is in the mix for any of the top middleweights,” he declares. Perhaps the surest sign of Truax’s move to stardom was not his win over Ennis, but the fact that he has now signed with Al Haymon. “I’d love to see what Al thinks, we should all get together and discuss and see what to do next,” says Margules, who has had four of his fighters sign with the notorious manager/adviser that is Al Haymon.

Overall, Margules seems to think that the partnership with Haymon will bring about a title shot for his emerging contender. “He’s a big strong middleweight,” Margules says of Truax. “I think he’s as good as [top ten middleweights] are… I’d love to fight Sam Soliman… I’d love to fight Kid Chocolate,” muses Margules. He obviously passionate about establishing another champion in his stable of fighters, and Margules is confident that with Haymon’s advice he can do it.

Changing subjects, we asked Margules what was in the works for another of his star fighters, Carlos Molina. Margules assured us that an October 11th fight against Cornelius Bundrage would happen in Cancun, Mexico. He did, however, seem concerned about having Molina fight in the states again. A current backlog of visas has made it very difficult for a number of international fighters to get visas and fight in the states. Molina is no exception, and Warriors Promotion is smartly keeping him busy in Mexico until the situation dissipates. We asked Margules when he thought we would see Molina back in the states, he replied pragmatically – “I think it will happen, I don’t think it’s going to happen over-night”. Whenever Molina does return, we are promised another exciting card from Warriors Production. Margules and Warriors Promotion hold some interesting prospects that I personally look forward to seeing develop over the next few years.