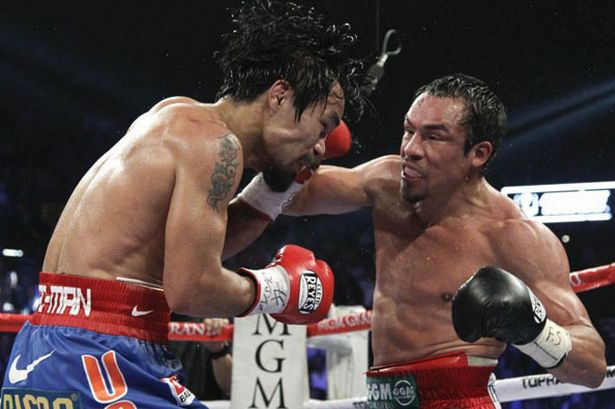 During a media conference call interview, Juan Manuel Marquez shared the same strategy that his rival, Manny Pacquiao shared, aggressiveness. The feeling I’m getting from both camps, is that this fight may be the best one of them all; certainly the most violent. At this point both men have nothing to lose. So will they lay it all on the line?

“It is difficult to knock out Manny Pacquiao but it is not impossible.” Marquez said with much assuredness, giving you the feeling you were listening to a scientist who had finally found the formula he’d been looking for. “We’ve trained to win and to win clearly.”

When asked about what he’s seen in Pacquiao that others haven’t, Marquez’s hall of fame  trainer, Nacho Beristain expressed that the reason is because he knows what’s in front of him. “(Pacquiao) is a difficult, high caliber fighter. He has a powerful punch that is dangerous every second of the fight. Juan Manuel knows how to read a fight. We don’t want to think about how difficult a fight is, but with Pacquiao, Juan Manuel will have to deliver the perfect fight, like he’s done before so we can dominate and win again.”

There’s no mistaking that the Marquez camp not only thinks, but knows they won the last fight.

“As the scorecards were being read I was happy because I thought they were in my favor,” said the Mexican champion.

The aging veteran talked at length about how his age, 39, is only a number. “Your conditioning coach (Angel Hernandez) said you’ve gotten stronger and faster, how is that possible,” asked one reporter.

Marquez explained, “It’s because we’ve been working with longer now. The last fight was the first time working with him, so naturally my body is developing more now that we’ve spent more time with him.” He also welcomed drug testing to dispel any rumors that might be floating around about how he achieved his new found youth.

There’s also no mistaking how much this fight means to the Mexican warrior. “This fight is very important to me. I have an opportunity on December 8. This win is important for me to be able to retire peacefully.” On retirement and what happens after the December 8th fight, he had no answer. “I don’t know. This is a crossroads fight for me. We’ll see how it goes and make a decision afterwards.”

Regardless of what happens in the fight, Marquez doesn’t hide his passion for the rivalry.

“The most important thing for me is pride. We have to demonstrate who is better. What drives me is my pride and the frustration from what happened in those three fights. That’s why I accepted the fourth fight.”

While the outcome of the fight is yet to be seen, one thing is certain. This fight will be competitive and the results will arrive with strong feelings. I suspect that in spite of all this talk of aggressiveness and knock outs, the fight will end up looking much like the first three. While Marquez claims he will be much active, he is also quick to tell you that he will fight intelligently. As his trainer said he must be perfect. Any opening for Pacquiao can result in a loss. So I don’t see Marquez allowing for as many openings as his claimed aggressive strategy would provide.

Then maybe, just maybe, this will in fact be the best chapter of the saga. After all, the last fight between Ali and Frazier was certainly the goriest. With Pacquiao’s step noticeably slipping and Marquez staring retirement in the face, maybe they will lay it all on the line. Maybe Marquez will do anything to win because this is a thorn in his side that refuses to give. Maybe he will get knocked out in the process of trying to put this ghost to rest. Maybe he will finally get the decisive victory that would be the crowning achievement of his hall of fame career.