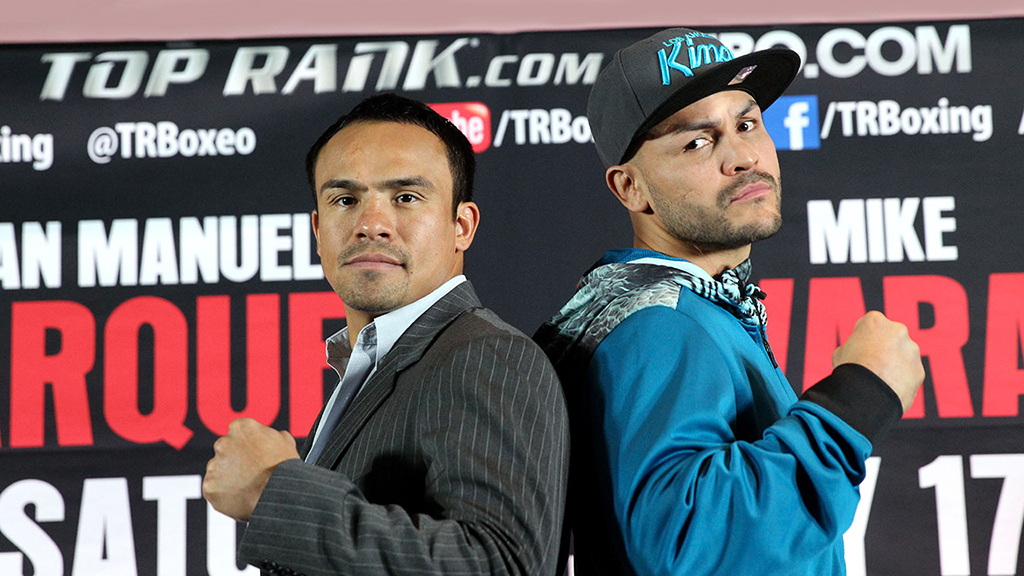 The fabulous Forum in Inglewood, California is ready to add to its already rich history after being refurnished in time for this Saturday, May 17th on HBO. Juan Manuel Marquez and Mike Alvarado are both attempting to reboot their careers after suffering losses in their last outing.

The biggest unknown heading into Saturday nights tilt is how much has the great Mexican boxer declined since his epic knockout of Manny Pacquaio in December 2012. From the sounds of it, Mike Alvarado is in a good mental state after a lackluster training camp in preparation for his war with Ruslan Provodnikov that resulted in him quitting on the stool in front of a ruckus hometown crowd in Denver last fall.

The Forum famously housed the 1980’s Showtime Lakers. It also became a hot spot for boxing diehards with monthly shows that drew legions of fans and legendary fighters. The Forums next chapter should start out with a bang when these two combatants faceoff. The proverbial dangling carrot for the winner is a fight with Manny Pacquiao later this year.

At age 33, with 36 fights under his belt, Mike Alvarado is at the stage of his career were there’s no tomorrow at the highest levels of the sport.

Sure, even with a loss to Marquez this Saturday, Top Rank could stage the Rios/Alvarado rubber match in the near future but this likely will be the “Mile High’s” last chance to reach greatness with a chance of a lifetime against a sure-fire hall of famer.

The last five fights have been brutal for Alvarado, who catapulted on the world scene with a come from behind knockout victory over hard punching, mostly known for his upset KO of Amir Khan, Breidis Prescott.

Prescott, the two battles with Brandon Rios, and his most recent outing with Provodnikov, were all very exhilarating to watch but none of those fights will give us any clues or help piece the puzzle for the style match up he will be facing in Marquez.

The fight of Alvarado’s that I watched to see how he may fare versus an elite counter puncher was Mauricio Herrera. In that back and forth battle, Herrera utilized his boxing skills but was drawn into a brawl with mixed results.

In the early goings Mauricio landed his left hooks and uppercuts with ease. He was effective with his jab that he landed to the head and body. He also fought well on the inside and landed counter right hands over the top of Alvarado’s jab.

Mauricio made the mistake of lingering on the ropes and on the inside far too long which ultimately became his downfall. It should be mentioned that Herrera didn’t have a full camp and when giving the chance to come in full prepared, let’s just say the proof is in the pudding which makes Danny Garcia the pudding.

Marquez’s last outing was a tough style match up with top ten pound for pound fighter Timothy Bradley. After watching that fight again it reassures me that Marquez’s uneven performance was not just age related.

Don’t get me wrong Juan Manuel looked his age at times, but for Christ sake the guy is 40 years old in what historically is a young man’s sport. It was a highly competitive fight and this scribe believes it was Timothy Bradley at his best.

Once the dust settled on Marquez saying he was robbed again, he admitted he couldn’t catch up to his aggressiveness, while other times boxing on the outside approach, that Bradley followed to a tee.

One can assume if a focused Mike Alvarado shows up this Saturday you can bet his camp looks to use a healthy work-rate with a combo platter plan trying their best to emulate what Bradley did to JMM.

Obviously employing a perfect game plan is easier said than done. Let us not forget the brilliance of Marquez and his long time trainer Nacho Bernstein. Best believe Nacho made Juan Manuel aware of the things he was doing wrong last October.

Can Mike Alvarado pull off the upset by using his skills and savvy in similar fashion to Timmy? Does he have the overall athleticism, foot and hand speed to play copycat? Will find out if Alvarado’s inconsistency gets the best of him in what will surely be the biggest fight of his life.

For Mike to have success it starts with, as always, the jab and pivot. Alvarado is a very fluid and accurate combination puncher with a busy work-rate, at times to busy for his own good. He will enter the ring with a significant height and reach advantage over the Mexican legend.

He favors lead left hooks, overhand/straight right hands, and uppercuts on the inside and surprisingly from the outside. Especially his upper cut from long range that can be very awkward and at the same time leaves him vulnerable.

Marquez loves to circle his opponent subtlety in the middle of the ring waiting for the opportunity to strike with one of his potent counter punches. He throws very similar combinations to Alvarado with the only difference being possible harder.

We know Marquez will be patient so one can assume that Alvarado will be the pace setter in the early rounds. It’s important for Mike to get an early lead if he has any hope of winning this fight on the judge’s scorecards without relying on knockdown.

If Mike gets out to an early lead at some point Marquez will have to come out of his comfort zone. The odds are very good that a 118-110 type scorecard in favor of Marquez may already be filled out with the biggest money fight for Top Rank being a fifth installment for PAC and JMM rivalry.

After a slower start from Marquez boxing fans should get a top level chess match with moderate doses of exchanges and rallies from each fighter throughout the fight. I agree with the view of some who compare this fight style wise to Marquez’s first fight with Juan Diaz. Many thought back in 2009 that Marquez was showing signs of slowing down and not able to carry the weight up from 126 and 130.
Mike Alvarado is so confident that he uttered the words taylor made when interviewed by Top Rank at the last presser referencing Marquez’s style. If those words get back to Marquez I can only envision a devilish grin on his face.

A small percentage of writers have picked Mike Alvarado by KO. There’s no doubt that Marquez has slowed down a bit over the years but not enough to get knockout in this fight. If anyone is getting knockout it will be the guy who has already been stopped twice in his career.
Marquez will have to dig deep once again in this quality fight featuring two highly skilled fighters. I’m calling for youth or at least the younger lion, to get served by way of short inside punches, mainly left hooks and uppercuts.

Both men will show signs of being buzzed. Look for many spirited battles with the war being won by Dinamita. If Mauricio Herrera can have that much success there’s no reason Marquez won’t. When hurt or in general, Alvarado would be smart to use his reach on the outside with a jab and movement.
My official prediction is Juan Manuel Marquez by Majority Decision.