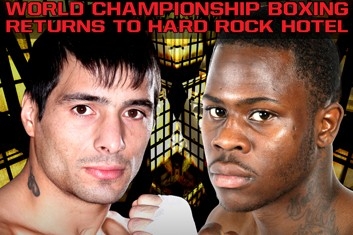 The first Showtime boxing telecast of 2013 is looking to be an intriguing one. The undercard of Lucas Matthysse vs. Mike Dallas Jr. is a triple header featuring Selcuk Aydin vs. Jesus Soto-Karass and Jermell Charlo vs. Harry Joe Yorgey.

Gimmicks have always been a part of sports. Boxing is definitely the biggest contributor of marketing some interesting, some heartwarming, some cliché, and sometimes just weird gimmicks.

Jermell “Iron Man” Charlo is undefeated at 19-0 with 9 ko’s and along with the coolest ring name in boxing, has a twin brother who is also an undefeated fighter, named Jermall Charlo. So how do you tell them apart? Well, Jermall and Jermell have done us the favor of having different hair styles. Jermell (19-0) has dread locks and Jermall (10-0) is clean cut.

Now that I got that out of the way, (I was pretty confused during my research), we can continue. The long haired, 19-0, Jermell with an ‘e’ Charlo is a very promising young talent. I haven’t seen a lot of him and there isn’t much on YouTube yet. However, what footage I did find is very revealing.

I see one of the fastest young punchers around. His combinations seem pretty basic, but are fast and explosive. Head movement is superb and his overall skill set is solid. His power wasn’t much to write home about, but in recent outings he’s had a couple of eye opening, or closing rather, knockouts.  One of this eye opening knockouts  came over Dennis Douglin, another young, touted African American with  a gimmick. The straight right hand is a thing of beauty.

Harry Joe Yorgey, on the other hand, is blue collar type who comes to fight and will try to break you down. His biggest claim to fame is being brutalized by Alfredo Angulo on HBO. He doesn’t have the most complete skill set or natural athletic ability, but he makes up for that with heart and determination.

It won’t be enough though. I see Harry Joe Yorgey getting stopped in the middle rounds after showing his heart and holding on for a few rounds following a big straight right hand, the same punch that started his demise in the Angulo fight.

In this bout, we have two fighters coming off of losses. One of which, has made a living as a hard-nosed journeyman, and one hoping not to fall into that category.

Selcuk Aydin (23-1) is coming off a loss to Robert Guerrero. Given Guerrero’s rapidly increasing stock, this loss isn’t as bad as it was first conceived. It was an insight into Aydin though. He isn’t very dynamic. He keeps a high guard and comes forward. He will try to break your will and break you down. A win is crucial in keeping his name in the title mix at 147.

Jesus Soto Karass is coming off a loss in fight of the year style affair with Marcos Maidana. He is as rugged as they come. He isn’t a total caveman in there, but he isn’t too skilled. He has no head movement and likes to stock his prey while taking shots in hopes of landing his. His heart makes him the definition of a journeyman.

Basically, this fight spells brutality. Expect these two to bang it out in route to a stoppage or an exhausting decision. I foresee Aydin coming away with the win because he doesn’t get hit nearly as much as Soto Karass.