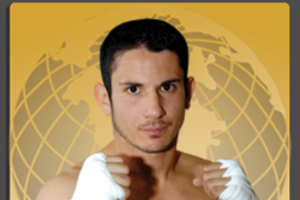 On Thursday night May 2nd, Banner Promotions and Thompson Boxing Promotions will present a special night of boxing that will originate from The Omega Products International, located at 1681 California Avenue in Corona, California and will be televised as a special edition of ESPN’s Friday Night Fights.

In the ten round main event, Mauricio Herrera will take on the exciting Ji-Hoon Kim in a Jr. Welterweight bout.

Herrera of Riverside, California has a record of 18-3 with 7 knockouts and has some solid wins on his resume.  The thirty-two year old won his first eleven bouts which included wins over Alan Velasco (8-1-2); Daniel Cervantes (10-0-1); Santiago Perez (10-1-2); Pavel Miranda (16-2) before winning the WBC USNBC Jr. Welterweight title with a 10 round unanimous decision over Luis Alfredo Lugo.  He made one defense of that crown, as well as a win over current world ranked Cleotis Pendarvis before suffering his first loss to former world champion Mike Anchondo.  Herrera went on to win five in a row which included a split decision over previously undefeated and world ranked Ruslan Provodnikov.  Herrera is looking to get back in the win column after losing a ten round unanimous decision to undefeated Karim Mayfield on October 27th, 2012 on HBO Boxing After Dark.

Kim, of Goyang City, South Korea, has a record of 24-8 with 18 knockouts and is currently ranked 14th by the IBF at Lightweight.  He began his career at the age of 17 in 2004 and had his first eighteen fights staged in South Korea.  While in South Korea, Kim captured The South Korean and PABA Featherweight titles.  Kim made a huge splash in his American debut as he stopped former world title challenger Kobo Gogaladze in one round on May 16th, 2008.  Kim then split his time between South Korea and the United States before winning an IBF Lightweight elimination bout against Ameth Diaz.  The win set up a world title opportunity, as he fought a terrific fight before dropping a unanimous decision to Miguel Vazquez for the vacant IBF Lightweight world title.

Kim has seen his popularity grow due to his all action style, has been featured on ESPN’s Friday Night Fight’s and has appeared in many “Fight of the Year” candidates.  Kim has picked quality wins over Yakubu Amidu (20-2-1) and previously undefeated Alisher Rahimov (23-0).  Kim is coming off a ten round unanimous decision defeat to world ranked Ray Beltran on December 6th, 2012 in a bout where Kim knocked Beltran down in round one.

In the co-feature, former world Lightweight champion Miguel Acosta will take on Miguel Gonzalez in a bout scheduled for ten rounds.

Acosta of Caracas, Venezuela has a record of 29-6-2 with 23 knockouts.  Acosta won the WBA Interim Lightweight title with a 9th round stoppage over previously undefeated Urbano Antillon (26-0) on July 25th, 2009.  He won the full title when he stopped Paulus Moses (25-0) in Moses’ home country of Namibia on May 29, 2010.  Acosta performed well before being stopped in 10 rounds to eventual world champion Brandon Rios.  Acosta got another crack at the WBA interim title but lost a twelve round unanimous decision to Richar Abril. Acosta is coming off a ten round split decision defeat to then undefeated Art Hovhannisyan (14-0-2) on July 20, 2012.

Gonzalez of Cleveland, Ohio has a record of 20-3 with 15 knockouts. The twenty-seven year old Gonzalez is a rising prospect as he continues to step up the competition and has quality wins over the likes of Tyrone Harris (24-7) and Humberto Toledo (39-6).  He is coming off a ten round unanimous decision defeat to highly regarded Mike Dallas Jr. on February 17th, 2012.

“This will be an exciting doubleheader on May 2nd”, said Banner Promotions CEO Arthur Pelullo.

“Herrera and Kim can get right back in the title mix with a win and the opening bout features Acosta who is a former world champion taking on Gonzalez, who with a win can throw his name in the middle of the Lightweight title picture”.

“We’re excited to host this special edition of ESPN Friday Night Fights Boxing on a Thursday night.   We’re especially enthused to feature our very own, Riverside’s junior welterweight slugger Mauricio Herrera in a tough competition against South Korea’s Ji-Hoon Kim.  I have no doubt that these two warriors will leave it all in the ring and give the viewing fights fans everything they expect to see and even more! The entire fight card will be an exciting one so the local boxing aficionados that will be in attendance are in for a turbulent treat!” said Ken Thompson of Thompson Boxing.

Other exciting  fights featuring fighters from the local area and will complete the card, including Hector Serrano of Perris, California Xavier Montelongo Jr.,Christian Navarro, Richard Contreras and Joshua Conley.