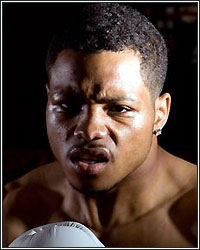 Karim Mayfield (19-2,11 KOs) is vying to get his career back on the winning track after two straight losses to Thomas Dulorme and Emmanuel Taylor, and looks to be doing the right things after doing just that with a unanimous decision victory in an eight-rounder over Michael Balasi in San Francisco last month.

Mayfield took time out of his training to speak with Lucas Ketelle on matters outside the ring. He told of how he rolled up on fellow one hundred and forty pounder Hank Lundy on Las Vegas Boulevard and gave him an unpleasant surprise by approaching him from behind, apparently scaring the Philadelphia native enough to be worthy of ridicule. The pair have never met in the ring so the tension may have been fraught.

After that he touched on the never-ending scandal involving Ray Rice and the security footage that emerged showing him dropping his girlfriend (now wife) with a brutal left hand as she charged him in an elevator. Mayfield’s demeanor changed from jocular fun-making when speaking of his contemporary, to placid and sincere when sharing his feelings on domestic violence.

“It’s crazy man to see what was done. Honestly when you have a spouse or a good friend, you don’t do a good friend like that. Your spouse or your wife that’s your companion overall. It was heartless at the time you know.”

He went on to diminish any possible excuse for such behavior and built momentum to the point where he actually offered to show Rice how the pros do it.

“You don’t do you peoples like that and I just feel that wasn’t cool you know. I’d like to get in there with him, period, point blank. Somebody better make it happen.”

Somebody should make it happen. Despite the size disparity Mayfield doesn’t seem to mind sighting that he, like many other smaller fighters spar with heavyweights all the time. I would rather watch that fight than Danny Garcia vs Rod Salka, it would be more competitive.