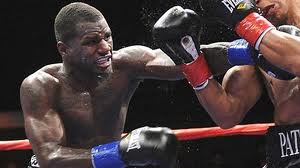 “Hammerin’’ Hank Lundy was sporting a mega-watt smile when he spoke with Vic Salazar after a close split-decision loss to Thomas Dulorme on December 6th at the Barclays Center in Brooklyn. His record now stands at 25-4 (12 KOs), but in each of his losses he did not go quietly, something the statistics cannot communicate through cold numbers and dashes.

After suffering a knockdown in the first round and by all accounts struggling to take hold of the contest in the first half, Lundy grew in to the fight down the stretch and looked to have exerted a fair amount of control by the time it concluded.

“In the first round I got caught behind the ear you know? I felt as though they should have called it but at the end of the day Hammerin’ Hank came in that Barclays Center and turned it out.”

He explained he and his corner’s approach and how the cautious start was a product of planning, not circumstance, and how he was able to make a tactical change when it was needed.

“Well you know with my team we felt like we could outbox him and we did at certain points but you know at the end of the day we picked it up and brought the fight.”

After confirming he feels comfortable fighting at 140 pound and will no longer venture down to the lightweight limit, he shared his opinion on what would have happened should the fight have been scheduled for twelve rounds -which is the generally accepted distance for a title fight regardless of the caliber of belt on the line- instead of the ten rounds that actually took place. It must be made clear though, he refused to assign any blame for the anomaly.

“Twelve round fight and he’d have been out in the eleventh round. That’s what I’ve been training for, a twelve round fight, and ya’ll seen as the fight went on I got stronger and stronger.”

Lundy was also full of praise for his coaches. He described the pairing of Mike Stafford and Barry Hunter as a “hell of a corner,” crediting them with using the right words when speaking to him as he sat on his stool between rounds, giving him the ammunition he needed to dig deep and bring the fight to Dulorme.

Even while displaying magnanimity towards his newly found cornermen, his most poignant words were those that revealed his attitude towards fighting, one surely not uncommon from his neck of the woods in Philadelphia, the infamous home to some of the toughest fighters ever to grace the annals of the sport.

“I ain’t no sore loser you know I came and I fought my heart out but I tell you like this, next time out ‘Hammerin’ Hank is going to be victorious.”