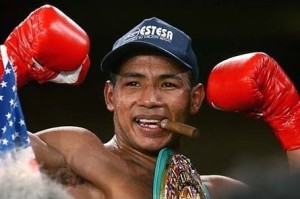 The Nicaraguan wild man Ricardo Mayorga (31-8-1, 25 KO’s) was trying his best to hype up his rematch with Shane Mosley (47-9-1, 39 KO’s) when he spoke to The Ring Digital over the weekend, choosing a crass route with the aid of an interpreter.

“The fact is I really want to kill him. I want to take him on and get rid of him. I’m gonna put him in a coma on the day of the fight.”

What a sweet sentiment, one reminiscent of younger days when he would proudly bear the scars earned in gang fights, and talk a whole heap of madness to opponents like Oscar De La Hoya and the late Vernon Forrest.

He will see Mosley for the second time on August 29th at The Forum in Inglewood, California seven years after they first met between the ropes. Their younger selves fought evenly with Mayorga’s unorthodox style troubling a slowing Mosley, who held a slight advantage on the scorecards going into the final round.

Mosley put Mayorga down twice in the final session, heavily so the second time to signal the stoppage and a mini revival of sorts for his career.

He brutalised Antonio Margarito five months later to earn a ninth-round TKO win which set him up to take on a recently returned Floyd Mayweather Jr.

In that hotly-anticipated contest, he gave Floyd the shock of his life with two puncturing straight right hands in the second round, almost flooring the ‘Money’ man who clasped on to Mosley’s arm and refused to let go until the cobwebs cleared. Floyd recovered well and boxed his way to a shutout win, but Mosley came ever so close to earning himself a famous upset victory.

Mosley has had five fights in five years since and looked steadily worse with the sound of each opening bell. Perhaps this is why Mayorga feels so sure of the unlikely outcome he predicted in the interview.

“I’ve been training very hard. I will knock him out in the first round.”

If Mosley is on the decline Mayorga has been on the missing list. Since a 12th-round TKO loss to Miguel Cotto in 2011, he has entered the boxing ring just twice. He beat a guy with a record of 9-23-1 inside a round last September before beating a 7-1 fighter five days before Christmas.

Based on those preparations the only person he’ll put in a coma is himself due to sheer exhaustion.

This fight serves only to line the pockets of its participants which can only be a good thing. Far be it from anyone following the sport or this fight to begrudge two veterans reviving the past for another payday. More power to them. But it will have few consequences, if any, for the wider picture at and around the light-middleweight division.