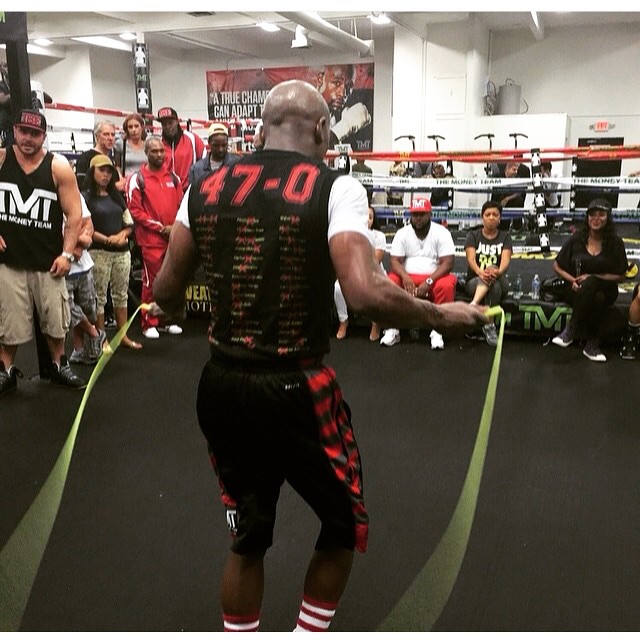 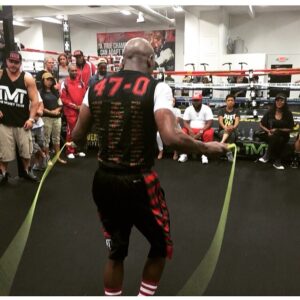 There has been a lot of debate on social media throughout the last few weeks regarding Floyd Mayweather Jr.’s training practices in camp as he prepares for his May 2nd bout against Manny Pacquiao. Some have accused Floyd’s style of training and the camp that he conducts as flawed. There is no doubt that Floyd is going hard in camp as he prepares for the biggest fight of his career, but the question that some fans are posing is directed at Floyd and whether or not he is possibly overtraining.

These assertions aren’t anything new. A lot was made of Floyd’s training practices in past camps, especially when they became the focus of HBO’s 24/7 series. We learned then that Floyd would regularly conduct training at late hours and in the very early morning, before sleeping off the day’s activities.

Floyd has admitted that he prefers training late at night and impromptu runs at 1AM are nothing out of the ordinary. These training sessions, whether they be midnight distance running, pickup basketball games, or typical boxing activities like target mitts, are usually conducted after a full day of physical activities and sometimes just before a poorly planned double cheese burger.

It is hard to question these methods considering Floyd is where he is and the fact that he’s familiar with his body. And he’s been doing it so long that no argument could stand that would suggest he loses something from these practices.

However, at Floyd’s age there are many things that factor into his training camps that probably weren’t of any concern in years past, but where does he draw the line? Having Alex Ariza, Pacquiao’s former strength and conditioning coach, helps a lot at this stage in Mayweather’s career, but Floyd has never been coached in a real way, at least not in a really long time. I doubt Ariza is allowed to do his job, at least not at full capacity. He’s there more as a guideline opposed to dictating Floyd’s actual day to day.

In an interview with ESNEWS, published on their YouTube channel, Maurice Lee, a sparring partner of Mayweather, said that Floyd has been putting in some serious hours in camp.

This is just one example from one person inside TMT’s gym, but it is pretty much the standard norm.

The question for fighters has always been overtraining. The idea being that too much was done during camp and it ended up having an adverse effect on the fighter’s ability to perform in the actual fight.

However, a recent article published in Flex Magazine suggests that overtraining has become a myth compared to its actual scientific realities. Scientist at the University level have yet to fully publish their findings, but early indicators show that overtraining is a state that effects the body as a whole and has more to do with the way it functions and less to do with peak physical prowess.

For example, you cannot over train a single body part, but you can exert the body in a way that weakens the integrity of your being as a whole, such as the immune system, blood flow, and other functionalities.

Furthermore, the state of overtraining doesn’t necessarily come from the strenuous physical exertion you put your body through, as previously considered, but rather the lack of rest you give your body. In other words, you can put your body through hell, and there are almost no repercussions so long as you give yourself adequate time to recover. The degree of rest is based on the toll your body goes through in a specific workout.

Floyd’s marathon workouts aren’t the issue, but his nonstop lifestyle at his age may finally be his undoing. That said, Mayweather is a physical freak of nature and, like other great athletes, Floyd is aware of the toll his body can endure. The greats are very conscious of their limitations, but the biggest difference is their ceiling and how it exists in another level capable of enduring a tremendous amount of physical stress.