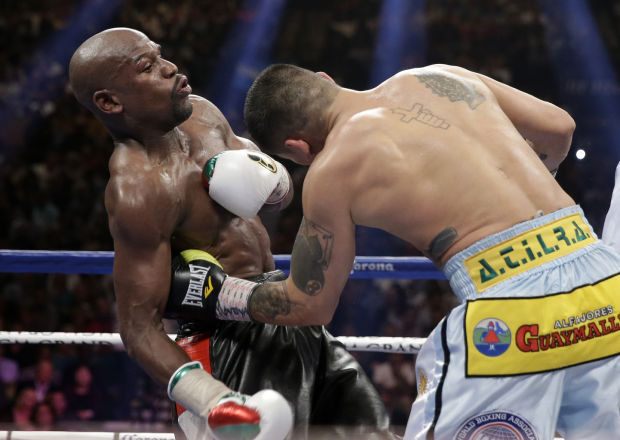 When the names Andre Berto and Karim Mayfield were dropped as possible Mayweather opponents in September for what might be Mayweather’s last possible fights, many reporters weren’t taking Mayweather serious. But Mayweather fired back comparing such a fight to when Manny Pacquiao faced Chris Algieri.

The man who has helped Berto revitalize his career, trainer Virgil Hunter says any man has a chance to beat any man on any given day, including Berto over Mayweather.

“Anytime you got a fight going, you got a good chance,” Hunter told ThaBoxingVoice.com. “Berto’s a good puncher and he’s re-motivated. He’s been winning and winning and sometimes it has a lot of positive effects.

“Personally, I feel he’s coming into who he is. He’s understanding a lot more things and working harder than he ever has. He’s starting to understand the mental part of the game.”

Hunter though isn’t holding his breath until he sees something more concrete come his way.

“Floyd’s entitled to say what he want to say and we have to respect that,” stated Hunter. “But me personally until something is actually etched in stone, I’ll just keep doing my thing. I’m not going to sit at home and ponder. If it’s a go, it’s a go, if not it’s got to be somebody.”

If the fight comes, Hunter says he’ll have Berto ready to win to the best of his training acumen even if the media feels Berto doesn’t deserve the fight.

“I don’t think its disrespectful Floyd could say what he wants; that’s his prerogative,” Hunter said of the media asking Mayweather if he was joking when mentioning Berto.

“I don’t know where it’s disrespectful. Maybe the media sees it different but those are the names that he says. He said it. It’s just hard for me to get tangled up in that type of situation.