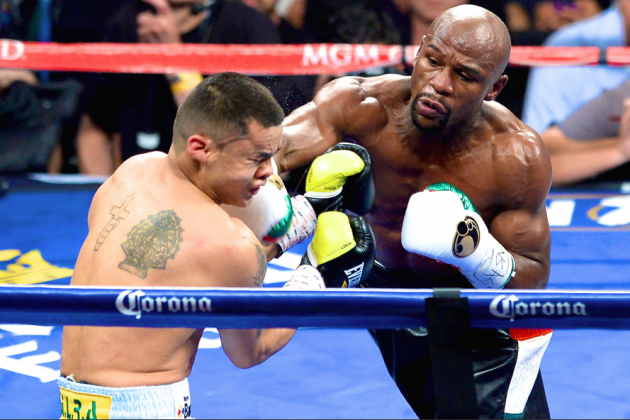 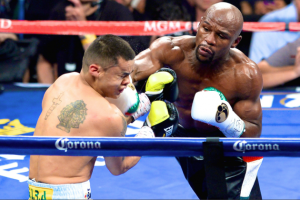 “MAYHEM: Mayweather vs. Maidana 2” fight week is officially here as Floyd “Money” Mayweather, Marcos “El Chino” Maidana and all the fighters in the SHOWTIME PPV® and SHOWTIME® televised action Saturday made their grand arrivals at a jam-packed lobby at MGM Grand this afternoon.

Here is what the fighters had to say upon their arrivals in Las Vegas Tuesday:

“It’s all about excitement. Saturday is about giving the fans what they want to see. It could be round one or round 13, but it’s all about the fans.

On what the fans should expect Saturday: “Blood, sweat and tears.”

“It feels great to be back here. I’m planning on winning on Saturday and I’d like to dedicate my future victory to all my fans out there, especially to all my Latino fans. “I have 12 more rounds to finish the job, that’s what I’m here for. I’m well prepared and ready to show that Mayweather isn’t all that everyone thinks he is.

“When I first analyzed Mayweather I thought he would be too fast to hit. But that wasn’t the case during the fight, I was able to hit him and keep him against the ropes and I plan on doing the same thing again.

“I’m definitely going to look for the knockout like I always do but I will take the victory any way I can.”

“I know Roman is a great fighter and he throws good punches. I can’t look past him and we had one of the hardest camps I’ve had and are very ready.

“Fighters like Roman are dangerous. They come with everything and sometimes they surprise you. We don’t underestimate anybody and we always come ready. We train harder and for longer and with more routines than ever.

“I know Roman boxes very well and has good defense. It might be hard to knock him out but we train very hard to stop him before the 12th round.

“Hopefully we get the victory and we can fight Rigondeaux and make that happen. If not, hopefully Frampton or Scott Quigg.”

“We’re here to try to disappoint Leo Santa Cruz on Saturday. I’ve been working out very hard three times a day and also focusing on strength and conditioning.

“Nothing worries me. I know myself, I’m ready. He’s just a great fighter who throws a lot of punches, but I’m a better boxer.

“I’ve known Leo for a while, we used to train together and that builds my confidence up. I’m a great counter-puncher and he’s a slugger and I think that works to my advantage.”

“I’m very happy and excited to be on such a big important card and I’m ready to get the win.

“I’m the champion and this is my night. I’m here to win and they will have to take it from me. I don’t care who I fight, I’m going to win.

“I’m motivated because I know all the Mexicans are here to support me and it’s going to be a great fight.”

“I take each fight one at a time, that’s how boxing is. Even once this huge fight is over, I’m focusing on my next fight the following day. Boxing is fight to fight and you must be focused for every opponent; each fighter is its own experience.

“The preparation for this fight has been night and day different than from my loss [against John Molina Jr.]. The stuff that Floyd Mayweather Sr. had me doing was crazy. Floyd Sr. has trained plenty of champions and comes from the Ray Robinson and Joe Louis school of training.

“Training for a championship fight is different than training for any fight I’ve had in the past. You have everything at your disposal, including numerous sparring partners. I probably sparred with eight different fighters for this camp.

“I just need to do what I’ve been doing in the gym. If I fight the way I’ve been looking in the gym, then Miguel Vazquez won’t have a chance against me. Honestly, I think I’m better than him at everything. He’s a smart good fighter but he can’t match anything that I can do. He has experience, but none of his wins have been impressive. I have more speed, power and defense.”

“It’s a very important and dangerous fight for me. De La Rosa is a good fighter but I will fight anybody they put in front of me.

“I’m going to stay focused on this fight. It’s one fight at a time. I’m focused on Saturday and then we’ll see what comes after.”

“I feel really good and ready to put on a show Saturday night. It’s really important for me to boost back up my career and get back to where I want to be.

“There’s no pressure on me at all. I’m just going to go up there and give him his third straight loss.

“Training camp is going very well. This fight could not have come at any better time. There are a lot of things that I can do to pull off the upset. His style is slow so I just need to have the higher output. He’s there to get hit.”

“I’m very happy to return to Las Vegas and to represent Mexico here.

“I’m calm and relaxed because of my preparation. I’m always the underdog but I end up winning.

“Like all true Mexicans we always fight with our heart and give our all. I’m going to do my part and make sure all the fans get a great fight.”

“I’m looking forward to going out there and giving the fans a great show.

“It’s a beautiful feeling to be here and I’ll never let my fans down. Come Saturday night you will see another great fight.

“Soto demands my undivided attention. I think the fans already know that me and Lucas Matthysse have to do it again.”