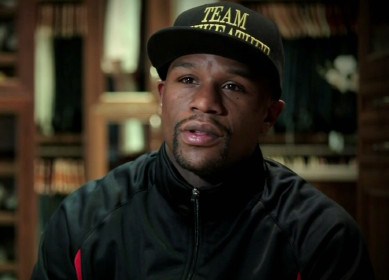 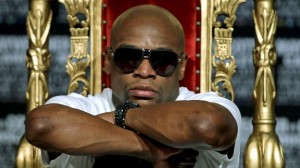 Come May 2nd, while the world trembles waiting for the opening bell of the biggest fight in history. Floyd Mayweather Jr. will sit in his locker room with his hands wrapped and his entourage ready and he’ll be thinking to himself, “This is just another day, it’s just another fight.”

According to an interview with FightHype.com, “Money,” Mayweather doesn’t believe his showdown with Manny “Pac-Man” Pacquiao will define his career. Money, who does what he wants, when he wants and on his own terms, suggests that Pac-Man is already trapped in a corner before the fight even begins. Surprisingly, or perhaps un-shockinglly, Mayweather sees himself physically superior to his opponent and also more financially secure.

“I can retire today, and I’m okay,” Mayweather said. “A lot of guys are forced to do things that they don’t want to do and I honestly believe at this particular time, even if Pacquiao didn’t want to fight, he has no choice because his back is against the wall,” Mayweather added, “Because he needs the money, I don’t. Every property that I have from Miami to L.A. to Las Vegas, it’s paid for.”

To Mayweather, Pacquiao is not as resourceful inside the ring as himself, contrary to what welterweight contender Shawn Porter told ThaBoxingVoice in a separate interview. Porter picked Pacquiao as the favorite and suggested the Filipino is more versatile than Mayweather. However, Money is already the decided favorite in this fight, and he listed why.

“I have a longer reach, I’m taller, I’m stronger and I’m more accurate,” said Mayweather. “I use a little bit of everything, I use my reach, I use my height; I use my movement. I use different techniques to whereas, (Pacquiao’s) not as versatile as Floyd Mayweather, and I think that’s the difference between the two,” Mayweather said.

Mayweather cites his advantages in size as part of why he’s unfazed by the challenge placed in front him.  Pacquiao has overcome size disparities since his rise to the welterweight ranks. His only two opponents of equal or smaller stature at welterweight have been Juan Manuel Marquez and Timothy Bradley, the only two to beat Pacquiao in the last nine-years. Mayweather’s physical attributes give him an obvious edge in height and reach like he said, however in the ring, skills can overcome size advantages. Unfortunately for Pac-Man, Money feels that he has the edge in boxing skills as well. 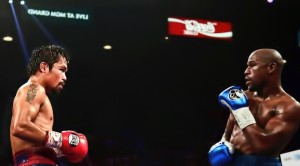 While Pacquiao is a congressman in his native Philippines and is one of boxing’s two biggest pay-per-view attractions, Mayweather suggests that Pac-Man needs the fight with “Money” and needs money in his pocket. Mayweather enjoys a sense of financial security that stems from his real-estate investments that he says are paid in full. Pacquiao, however, is currently battling tax collectors in the Philippines and the U.S. according to forbes.com.

It has been reported that Pacquiao avoided a $75 million blow to the gut of his bank account after the Philippine Supreme Court lifted a cash bond regarding money he owes from fights in 2008 and 2009. The tax battle is ongoing and although Pacquiao has been fighting in China to avoid tax rates in the U.S., his scheduled clash with Mayweather will take place at the MGM Grand in Las Vegas where the taxman is sure to take a piece of his biggest payday.

Mayweather (47-0, 26 KO) and Pacquiao (57-5-2, 38 KO) recently agreed to a 60-40 split of $200 million, with the majority going to Mayweather according to forbes.com. From what’s been collected Mayweather has virtually every edge; he’s the favorite by many boxing insiders, he has the advantage in size, he’s more skilled according to himself, he’s making the lion’s share of the purses, he doesn’t “have” to take the fight as he implied, and he has the home-field advantage with the biggest fight in history taking place in his backyard at Las Vegas. Still, Mayweather is nothing if not gracious to his opponent’s accomplishments and style.

“I think he’s a very exciting fighter, I think he’s strong, but I think that this is a different league,” claimed Mayweather before he shifted the focus back to himself, “Only thing I did was constantly work, constantly believe, constantly pray and anything is possible.”

Let’s not forget about Alex Ariza, another possible edge for Mayweather. Ariza had worked with Pacquiao alongside Freddie Roach for years before he was asked to leave their camp. Now both Ariza and Mayweather say that he is aligned with “The Money Team”.

Who knows if adding Ariza to his corner will give Mayweather inside clues on how to beat Pac-Man? What is certain is that Mayweather can see a different Pacquiao in the ring now, which is a credit to Pacquiao since Mayweather claims he usually doesn’t study film on his opponents.

“I see a major change in Pacquiao when Alex Ariza left his training camp, which is a great thing. Alex is working with me now,” said Mayweather, “Once Alex Ariza left, he’s a total different fighter.”

However, you don’t become the pound-for-pound best fighter in the world by overlooking your opponent. Mayweather insists that he’s not overlooking Pacquiao.

“He may not be the same fighter, but this is a guy that I cannot overlook, he got here somehow someway,” advising Pacquiao to do the same, “He’s not in there with another guy named Algieri, that’s a kickboxer he was fighting, from what I was told. He’s fighting a legitimate welterweight.”