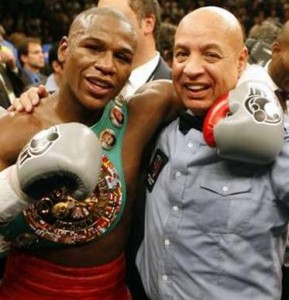 After nearly six years, the pestilential nonsense between Floyd Mayweather Jr. and Manny Pacquiao will conclude inside the ring on 2 May at the MGM Grand in Las Vegas. Depending on who you talk to, either Mayweather is the favorite or Pacquiao is the favorite. According to an ESPN poll, Mayweather is favored to win the fight.

On the other hand, a L.A. Times poll says that 71% of readers believe Pacquiao will be victorious. Pacquiao supporters deride the ESPN poll and likewise from Mayweather supporters. Abner Mares is one of the few voices that has continued to break down fights with an unbiased perspective. And like Pacquiao, he knows how it feels to get hit with something that was unforeseeable.

That mere blemish on his record came at the hands of Jhonny Gonzalez in a first-round TKO defeat. In an interview with FightHype.com, Mares broke the fight down between the welterweight superstars.

“I got Mayweather. Pacquiao’s a great offensive fighter. He throws a lot of punches, he is really explosive, but Mayweather makes you fight his fight all the time,” Mares explained.

Mares added that Pacquiao struggles against technical fighters, like Juan Manuel Marquez. Mayweather, who fought Marquez in 2009 after taking a 21-month layoff, subjugated the smaller, lighter Marquez for a unanimous decision. ‘Money’ knocked down Marquez in the second round and then proceeded to dominate the Mexican legend the rest of the way. Mares sees the fight playing out in the same manner.