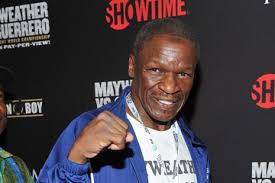 A lot of people in the boxing world were highly impressed with the way Amir Khan defeated Devon Alexander. While Khan wants to throw his name in the Mayweather sweepstakes and feels he deserves the fight, Floyd Mayweather Sr. was not impressed at all

“He fights like washing women,” Mayweather Sr. told HustleBoss.com while motioning and throwing crazy punches. “The man throws punches from all kinds of ways, a wash women fights that way.”

Paulie Malignaggi was highly impressed with Khan’s performance even saying Khan could be the one to be Floyd Mayweather.

Sr. saw that fight and feels Khan needs to do more to be included in the same sentence with his son.

“I’m a be honest with you man there’s nothing that impresses me about Amir Khan. Amir Khan, he fights like a wash women, all them damn punches (Mayweather Sr. motions and flings crazy wide punches), He ain’t got no control or nothing.”

Mayweather Sr. does believe Khan could give Manny Pacquiao a fight based on sheer value but no other is a match for his son.