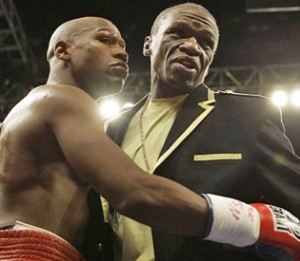 Floyd Mayweather Sr. in a recent interview with Thaboxingvoice.com entertained the idea of a Mayweather-Pacquiao fight occurring. He stated, “I’m a be honest with you right here. I believe with my heart it’s going to happen, but I’m a tell you this. Even though my son is older now, it’s still going to be a mismatch. Floyd will tear him apart.”
Its evident both camps believe their own fighter would be victorious if the bout ever occurred, but the majority of boxing experts still favor Floyd Mayweather Jr. Despite this, the boxing world is still eager to see this fight actually take place.
Both parties continue to show interest in making the bout happen, but due to managerial and promotional issues the fight still hasn’t come into fruition. The closest the mega-fight ever came to happening is in the year 2010. According to ESPN, “The fight was all but done, but Floyd Mayweather started to make more demands of rigorous blood testing. Pacquiao has agreed to blood testing three times, but not till 24 days before the fight, and one after the fight. Floyd Mayweather said he would accept the random blood testing up until 14 days before the fight. So they are 10 days apart. Then Bob Arum said that’s it, it’s over, the mega fight is gone.“
Years later after numerous taunts from both parties, the situation remains similar. Now the issue is no longer random drug testing, but political disputes.  The same Cold War that exists amongst Golden Boy and Top Rank seems to be dwindling down, but friction remains between Al Haymon and Bob Arum.
Mayweather has also escaped the grasp of Golden Boy and officially made Mayweather Promotions a licensed company. This means Top Rank, Mayweather, Al Haymon, and the networks all have to come to an agreement. Whether this affects the possibility of this fight occurring remains to be seen. After Pacquiao’s contract ended with Arum in 2014, he immediately resigned to a two-year extension. This enforced both fighters to stay in opposite spectrums. This has been an everlasting stalemate, but perhaps it’s bound to break soon enough.
Tweet