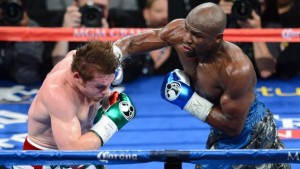 If Floyd Mayweather defeats Andre Berto this week as many assume he will, there are still big fights left for Mayweather. The biggest fight might not be the one you’re thinking which would be against a ‘healthy’ Manny Pacquiao. Instead, a fight with the winner of Miguel Cotto and Canelo Alvarez might be bigger.

Granted, Mayweather beat both but there are new factors to sell. If Canelo Alvarez defeats Miguel Cotto, the sell is a Mexican middleweight champion, who was very young in their first encounter on a Mexican Holiday weekend.

If Cotto wins, the sell is a revived Cotto with Freddie Roach, who Mayweather said was the toughest fighter he ever faced. Either way, Mayweather would attempt history at winning the lineal middleweight title.

His dad wants no parts of middleweights for his son at the moment.

“I’m gonna be honest with you; I don’t think that my son should be fighting at no middleweight at his age,” Floyd Mayweather Sr. told OnTheRopesBoxing.com. “He doesn’t need all that kind of contact. He’s got his money, that money you got right there, if you can’t live the rest of your life with it, oh well. I wouldn’t fight neither one of them at 160lbs, that’s too much.”

Mayweather think it’s a tossup fight but favors Canelo’s youth in his fight with Cotto.

“I really can’t just sit up and tell you who I believe because to me it’s like a toss-up with that fight. That’s a real tough fight. I think Alvarez is younger, I will say that Alvarez is younger, and he probably boxes a little bit better. If I do go with someone, I would probably go with Alvarez.”

Should Alvarez win and his son continue to fight, he says they’d only fight Canelo at 154 and not at 160.