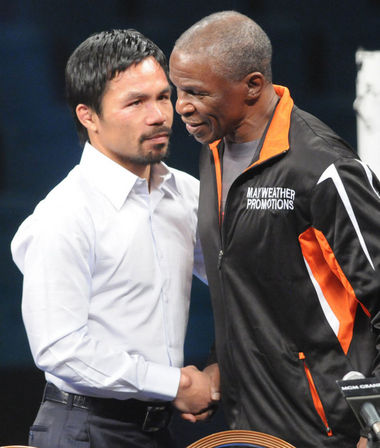 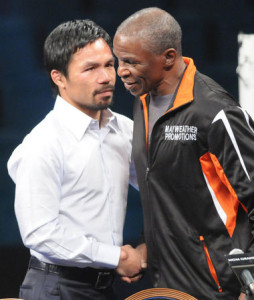 The 62-year-old described his son’s fight against the former eight-division world champion as “one of his easiest fights,” as he was speaking to media outlets at the Mayweather Boxing Club.

Many have blamed the uninspired matchup on Pacquiao. Throughout the build to the fight, it seemed like Mayweather was ever so serious while Pacquiao was ever so happy to be in a position to fight the undisputed pound-for-pound king of boxing.

Mayweather, to say the least, was unimpressed.

Mayweather was asked if Pacquiao possibly got hurt from a punch and decided to cruise for the rest of the fight. He isn’t buying that either.

“He couldn’t cruise. Floyd was tearing him up. He couldn’t do nothing,” he added. “Pacquiao is just a liar with no skills.”

With every question Mayweather was asked, the lambasting continued to drag on.

On Aug. 22, Pacquiao claimed that his shoulder injury was healed through salt water and God. As whacky as this saga has been, it wouldn’t be completely ludicrous if we expected an appearance from the ancient Asian goddess Cybele.

Mayweather wanted to laugh when asked to give his thoughts.

“Come on man! How does your arm gonna heal that fast? I don’t care what kind of water you put on your arm,” Mayweather sternly questioned.

“When your rotator cuff is messed up man, you messed up for a while. You don’t get over nothing like that in two or three weeks.”

However, Mayweather lightened up when he was made aware that Pacquiao’s trainer Freddie Roach admitted in an interview with Fight Hype last week that he thought his son won the fight.

“Did he finally say he thought my son won!?” Mayweather responded ecstatically. “Me and Freddie Roach might get to be the best friends in the world.”