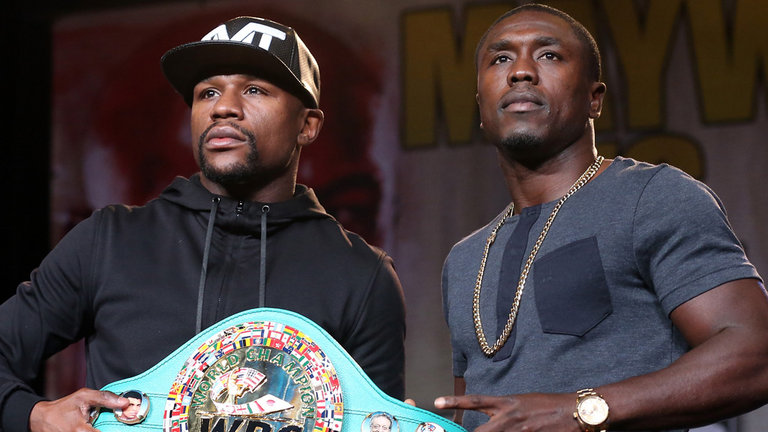 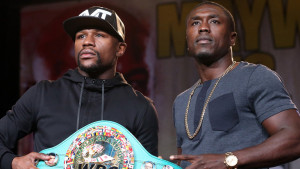 Boxing fans have given their remarks and not everyone is particularly on board with Floyd Mayweather as he prepares to potentially ride off into the sunset on Sept. 12 with what some call an “easy” fight against former welterweight titlist Andre Berto.

When the fight was made official, among the familiar names who dished out their disappointment included ESPN’s Dan Rafael and Skip Bayless.

“Let’s be honest: It’s laughable Floyd is fighting Berto instead of Amir Khan or Keith Thurman or Shawn Porter,” Rafael stated on Aug. 4.

“I would give Money Mayweather my 75 bucks NOT to fight Andre Berto.”

The fans have been quick to degrade Berto because he’s 3-3 in his last six fights while Mayweather Promotions CEO Leonard Ellerbe is also quick to acknowledge that so is Manny Pacquiao.

Have we ever seen Andre Berto in a fight that hasn’t been exciting? Not from what I have seen.

Yes, he was stopped by Jesus Soto-Karass, and he’s been beaten my two prior Mayweather victims in Robert Guerrero and Victor Ortiz, but the guy is exciting to watch.

Before Mayweather came to be the cash cow of the sport following a split-decision victory over Oscar De La Hoya in 2007, he knocked out or stopped a majority of his opponents.

There’s a possibility, if this is his actually his final fight, he’ll restore the ‘Pretty Boy’ version of himself for at least one Saturday evening as a goodbye to fans that have supported him for the past 19 years and reward them with an explosive fight.

Well-respected trainer Naazim Richardson spoke passionately to Tha Boxing Voice previously about how Mayweather deserves to go out the way he wants to because he’s earned that right from his accomplishments.

On the other hand, Richardson also didn’t count Berto out because Buster Douglas shocked the world by knocking out Mike Tyson in 1990 in one of the biggest boxing upsets of all-time.

“Floyd deserves to fight who he wants to fight to be honest with you,” Garcia told Tha Boxing Voice’s Nestor Gibbs. “He beat Pacquiao, he beat Canelo, and he had two good fights with Maidana.”

“I think it’s going to be better than the Pacquiao fight to be honest with you. Berto is a younger fighter.”’

Would Mayweather-Garcia be better than both?

Although Berto will likely come out on the losing end, expect a fight that’ll start off as a tropical storm, and quickly become a hurricane of bombs.