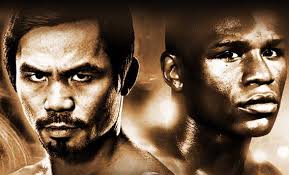 Its January 2nd and the boxing world awaits two mega fights that have not yet been signed. One is Miguel Cotto and Canelo Alvarez and the other is still the richest fight in boxing history, Floyd Mayweather and Manny Pacquiao.

Pacquiao or his public relations guy took to twitter and tweeted to Mayweather on New Year’s Eve, “The ball will drop at midnight to usher in 2015. @FloydMayweather let’s not drop the ball on fighting each other next year! #LetsMakeFistory.”

Again, it seems like we’re back in 2010 where tweets and callouts from both fighters are common but the end resolution here is, there is still no fight.

Are there negotiations going on behind closed doors, who know but Bob Arum told ThaBoxingVoice.com that he wants to make the fight, contrary to a report from FightHype.com where Pacquiao’s lawyer is saying that Bob Arum is the one holding up the fight.

Pacquiao has told the world that he is willing to take less money but how much less money, it’s not known. With Arum working with Oscar De La Hoya to make Cotto-Canelo on May 2nd and Mayweather not budging in his May 2nd date, are we going to get this fight or just more excuses in the end? Stay tuned.