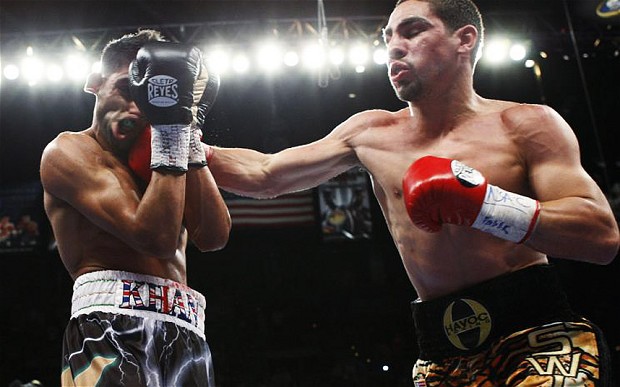 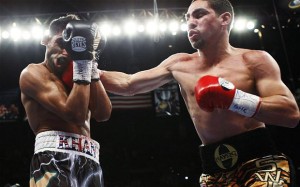 Danny Garcia extended his unbeaten streak to 31-0 in his first appearance as a fully-fledged welterweight last weekend by stopping veteran Paulie Malignaggi in nine rounds at the Barclays Centre in Brooklyn, New York.

Malignaggi’s infamous lack of power -with just 7 KO wins in 39 contests going in- meant this was a decidedly low-risk assignment, the success of which would be determined by the manner of the win rather than the result itself.

Garcia retained his characteristic composure and slowly walked the smaller man down, often missing with lead right hands and hooks, but when he did land, catching and returning fire straight away, the effect was obvious to see.

In Malignaggi’s own words after the fight Gracia ‘broke him down’ and referee Arthur Mercante Jr. stepped between them in round nine with both men still on their feet.

Garcia’s reputation as the king of the 140-pounders means he will almost certainly be in the conversation for title opportunities now he has officially landed in his new home.

“You got [IBF champion]Kell Brook, you have [WBA champion] Keith Thurman. I mean, you know there’s a lot of good fights at 147 and I hope some of them come off.”

And on Garcia’s chances against the bigger dogs:

“I think Keith might be a little too big. Keith is a big welterweight man he’s a very big welterweight, but you never can count Danny out. You know he did what he had to do, he fought a very good fight Saturday[against Malignaggi]. He used his jab, very effect so you know, time will tell.”

Thurman’s power is certainly more of a concern than his size having accumulated 22 KO’s in 26 uninterrupted wins, and Brook is certainly no slouch in that department either.

However, Garcia showed his sturdiness and willingness to face a bomber when he dismantled the fearsome puncher Lucas Matthysse in 2013.

That result still stands as the finest of his career but his subsequent bouts have failed to capture the imagination. Debatable decision wins over Mauricio Herrera and Lamont Peterson sandwiched a walkover of lightweight Rod Salka that has turned into the benchmark for pointless, overmatched fights.

Garcia had an opportunity to start afresh in his new class and started off well enough by beating Malignaggi inside the distance. Let’s hope he puts his best foot forward from here.