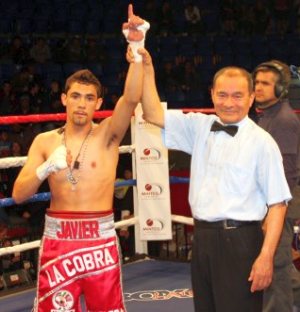 Javier Mendoza successfully defended his IBF junior flyweight title against Milan Melindo in his backyard of Mexico. It wasn’t the ending he probably hoped for but it was definitely a convincing performance against an opponent in Melindo that came to fight.

Mendoza displayed a dominant game plan early on and was able to rely on pure punching ability to cruise through most of the round. That’s not to say that Melindo didn’t have some moments created out of sheer grit. Still, Mendoza was the clear-cut talent and separated himself thoroughly.

Mendoza wasn’t as dominant to begin the 2nd round and Melindo dug deep and walked through some hard punches and fancy combos to get in his own hard shots. Melindo’s shots were looping and his overhands landed, although they didn’t seem to effect Mendoza very much. Mendoza stayed calm and weathered the brief storm to immediately regain control and absolutely teed off on Melindo.

There were hard shots being landed from both fighters, but Mendoza was the one that was able to combine slick boxing offense with smart, brawler style offense.

The jab was an underutilized tool for Mendoza, not that he didn’t use it, but it was abandoned when things didn’t go his way, especially when Melindo used counter shots to the body as opposed to the traditional “over-the-top” on the jab counter.

Distance was a key factor in Mendoza’s success. He was able to keep the fight in his range, which made it difficult for Melindo to string together meaningful offense. And, even when Melindo was landing it didn’t have the pop necessary to keep Mendoza honest.

After a few shots below the belt, and after some terrible acting on the part of Mendoza, the referee deducted a point from Melindo in the 5th.

Mendoza was cruising in the 6th, although he wasn’t being given a free ride, when he was cut open with what was ruled an accidental head-butt. The ring doctor checked it out and he and the ref ruled it was too severe, calling a halt to the bout.

Since the fight had gone past 3 rounds it was eligible to be scored and the judges awarded the fight to Mendoza with a unanimous decision.