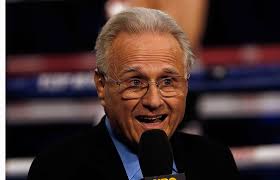 Larry Merchant in a recent interview with Thaboxingvoice.com, shared his thoughts on the possibility of Al Haymon shifting gears to NBC, the matchmaking amongst his stable, and why certain fighters are drifting into the background.

Merchant’s thoughts on the possible NBC deal were, “I’ve heard about the speculation of NBC, I’ll believe it when I see it. This can be a good thing for boxing, to have a 3rd venue. Maybe they see an opening to put on meaningful fights, so that’s the good news.”

After praising Haymon’s possibility of moving to NBC, he then criticized the lackluster of Haymon’s matchmaking process as of late.

“Al Haymon has got a lot of quantity of fighters, and from quantity comes quality, but there seems to be a lot of maneuvering into getting the guys into the big fights. We don’t get to see good fights along the way, and it is good fights that are the foundation of boxing. If the whole point of this is to build a resume against unknowns and then to say I got an undefeated fighter, then it may be a good plan for him and his fighters, but I don’t think it’s good for the networks or the fight fans. The fight fans should have a chance to see good fights. Whether these fights are called championship fights or elimination fights, the point is, is it a good fight? The problem with boxing is we are not getting enough good fights.”

Merchant also shared his opinion on fighters drifting into the background, and some of their battles outside the ring. Merchant stated, “We have to see fighters like Ward, and Garcia and others who are not fighting, or rarely fighting get back in the ring. There are just to many well-known fighters who are fighting their promoters, taking long vocations, or trying to position themselves for a big event, and not fighting. This causes them to drift into the background.”