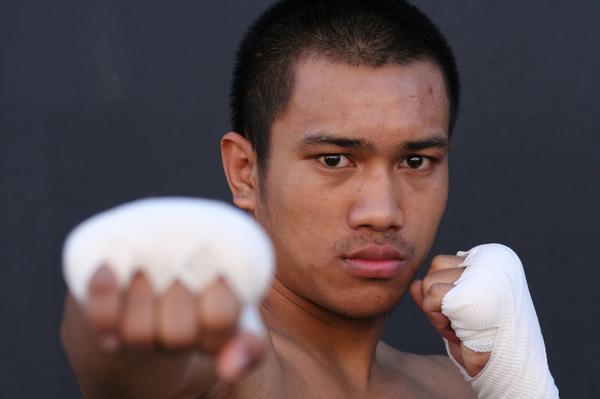 With top fighters such as Manny Pacquiao, Nonito Donaire, Donnie Nietes, and Brian Viloria, Filipino boxing is extremely hot right now. Mercito Gesta, a promising young Filipino fighter, will be looking to add his name to that list of proven champions, as he takes on IBF Lightweight Champion, Miguel Vazquez on December 8 on the Pacquiao-Marquez 4 undercard. “We have been waiting for not only for Vazquez but also for a title fight. We’ve been eyeing Vazquez and now they want the fight and we want the fight. Right now it’s all set. I’m just so excited right now that it’s really going to happen. It’s like a dream come true,” Gesta explained.

It hasn’t been an easy road for Gesta. It took some time for him to finally get to the big stage, but he feels he is ready. “We watch tapes and try to learn from every fight. Every fight is a new learning experience. Now we’re focusing on the guy that we’re fighting for the title and that’s Vazquez.”

Gesta will have his work cut out for him when he takes on the tall rangy, Mexican, but he seems pretty confident that he has the right game plan to deal with the champion’s awkward style. “I’m not going to chase this guy. I’m just going to let him run and eventually he’s going to have to come inside to land his punches, and I’m going to time him and counter him. I’m way faster than this guy. He’s open when he throws punches,” claimed Gesta.

Team Gesta has decided to try something new in preparation for the biggest fight of Mercito’s career. “We’re in Big Bear and training to take it to the next level. It’s my first time training in Big Bear. We are here in Abel Sanchez’ gym, champions train here and that’s why we decided to train here,” he said. Gesta’s trainer/manager Vince Parra added, “We work collectively as a team. Mercito’s father and I work hand in hand in conditioning him and working on the game plan. His whole family is here supporting him. This camp is very family orientated. His family has been behind him since he was a kid.” Parra went on to say, “We had great sparring. Joel Diaz Jr. helped us out good. We used him at the beginning of the first week. Joel is one of those guys who pushes you and gets you oxygen. We will be picking up the real good 130 lb prospect out of Miami, Florida, Rances Barthelemy. He is a real tall proficient Cuban boxer.”

Early on, veteran promoter/matchmaker, Don Chargin was the driving force behind Gesta’s career and is a big reason why he got where he is today, but he was only able to get to a certain point with Chargin before a change needed to be made to get to the next level. “We became free agents right after our final fight with Chargin in 2011 in April. We wanted to give Golden Boy the first chance but to be frank we thought that the offer that they gave us was complete disrespect. When we realized it wasn’t going to happen we went with Bob Arum. Everything we asked for he gave us,” said Parra. As a result of the move made over to Top Rank, Gesta now finds himself fighting on the undercard of one of the biggest PPV events of the year and fighting for his first world title.

There will be a lot of pressure on him fighting on the undercard of fellow countryman Manny Pacquiao. The expectations will be high amongst the Filipino fans. “Filipino’s are expecting a lot, but I’m just trying to put it in my head to just do my best and not think about the pressure. I’m just going to do my thing and try to fight a good fight in the ring,” Gesta explained.

Looking back on Gesta’s career you’d be very hard pressed to find him in a bad fight and given his fan friendly aggressive style, the fans should get their money’s worth on December 8.