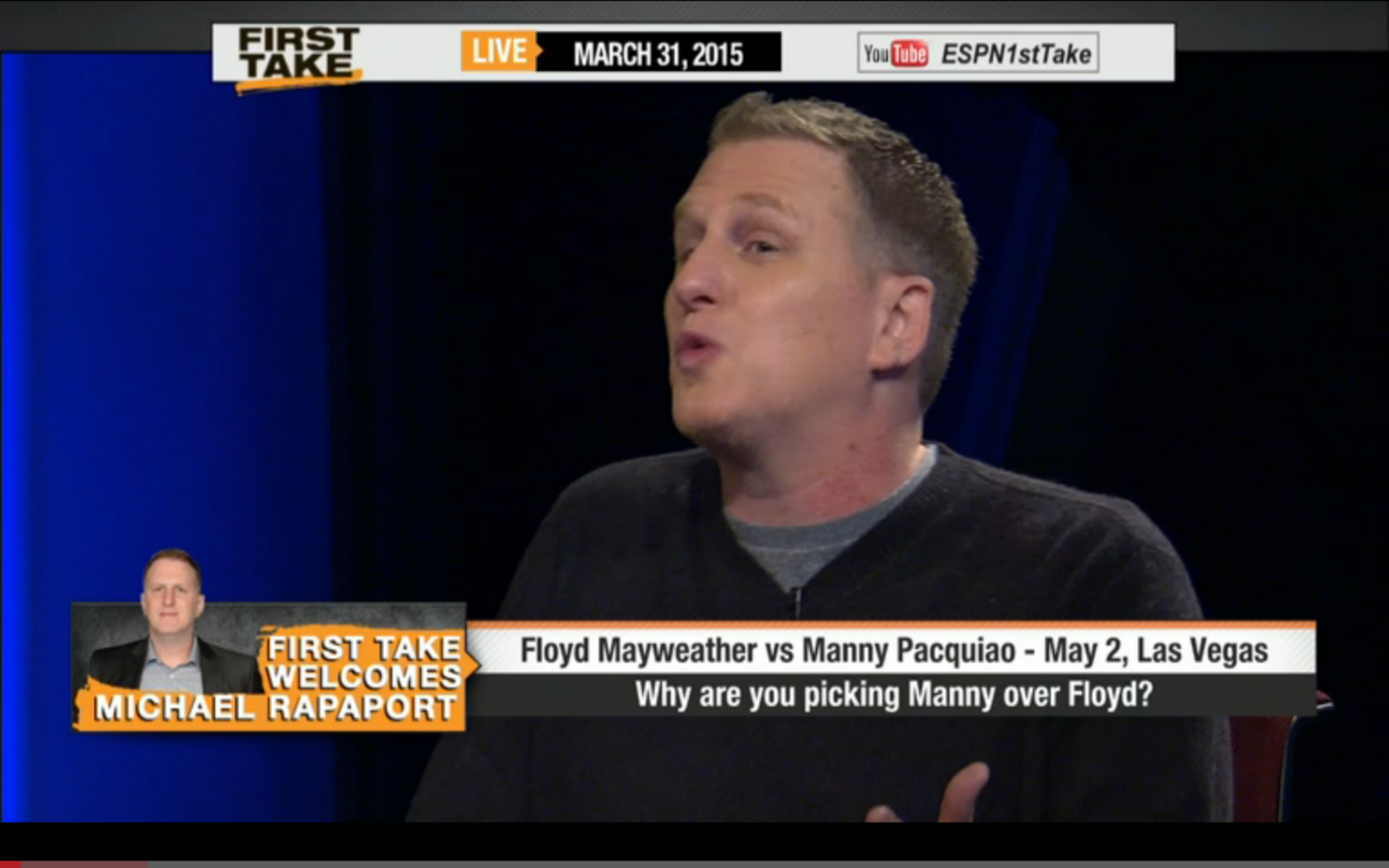 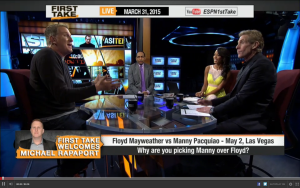 Michael Rapaport was on ESPN First Take on Tuesday, and that means I actually had to watch Stephen A. Smith and Skip Bayless talk about boxing… the things I do for you people!

Hot on the heels of making his prediction that Manny would not only be victorious over Floyd Mayweather Jr. but he would also knock the defensive wizard down in the process, Rapaport wished upon the boxing gods for no shenanigans.

Rapaport is echoing the concerns of many when he hopes for no shenanigans. As a fan of the sport, this fight is as mainstream as it gets. We need this to go well. Fortunately, there will be no Fan Man like there was in Bowe-Holyfield II over 20 years ago. Not only is the fight indoors, but the Fan Man strapped on a different set of wings back in 2002. RIP Fan Man.

That said, there is still the legitimate worry about a bad decision. There is a sense that the best shot for a very lucrative rematch will be if Manny wins. I suppose the assumption is that Floyd’s “competitive instinct” will kick in, and he’ll feel the need to prove himself in a rematch. That’s the (misguided) theory, anyway.

With his chance to respond to Michael Rapaport, Stephen A. Smith took an unexpectedly non-controversial stance.

“I don’t believe that there’s gonna be any shenanigans, I think there’s too much money at stake.”

… and then immediately contradicted that statement…

“The only thing I’m worried about Michael, is somebody getting robbed, decision-wise… specifically Floyd and here’s why… Because you see, if Manny were to lose in any way, particularly controversially, there will be a rematch. But if you rob Floyd, Floyd may say ‘bump it’ and walk away… for good.”

There is a lot to go over here but first, we are going to have to clarify what a “robbery” is in the boxing context. There seems to be a lot of confusion out there as to what actually constitutes a boxing “robbery”. There are no “robberies” in close fights. Hagler, one of my favorite boxers of all time, was not robbed. He lost a very close fight that could have gone either way. In this case, I think it went the wrong way, but it wasn’t a “robbery”.

In order for either Manny or Floyd to be robbed, one will have to dominate the fight and then lose. Does anyone see a dominant decision victory happening? Even if you expect Floyd to do what he does, that will still consist of a slow start where he willingly gives up a few rounds. If Manny clearly wins 4 of the 12 rounds, and takes 2 close rounds that you have for Floyd, your 8-4 landslide victory for Floyd ends up being a draw. That is not a robbery. That’s two iffy rounds going a different way then you had it. Look, math isn’t everyone’s strong suit, so I get it. It’s tough to grasp in the heat of the moment, but unless one of these guys is knocking the other all over the ring, this fight is going to be close enough to eliminate legitimate “robbery” talk.

Would a fix even benefit a rematch?

I don’t see how a controversial decision would be good for a rematch. Why wouldn’t Vegas be worried about alienating the casual fans with a move like that? After all, it is the casual (yet fickle) fans that make a $300+ million fight possible. Why take such a large risk just to rob Floyd? Are they that concerned with Floyd not taking a rematch if he wins? Why wouldn’t Floyd take a fight against a guy he knows he can beat? He’s done it before. I’m sure his 70% cut as the A-side would be more than enough to grease the tracks to a rematch.

I don’t believe it will matter who wins. In the end, it will come down to how competitive the fight was. If the people are satisfied, they will demand more, and there will be another fight. As has always been the case, hundreds of millions of dollars are the reason why we got the first fight, and they will again be the reason that we get a rematch.

Even though a fix may be unlikely, there are still concerns about the bullshit robbery talk we are going to get no matter what. You know… the whining about a robbery regardless of how legitimately the fight played out. What happens if one side feels like they have been robbed? What then?

If Pacquiao feels robbed, he will probably just take it in stride. Things seemed to go okay when he was legitimately robbed in his first fight with Tim Bradley, so there seems to be no reason for concern on his side.

Unfortunately, Mayweather’s side is notorious for whining about anyone that doesn’t unconditionally praise Floyd. If Mayweather loses a close fight, there will be more talk of robberies than there were in the film “Point Break”. Consider that a guarantee.

Would Floyd actually walk away if he felt robbed?

Stephen A. Smith compared Mayweather’s mentality to Hagler’s… because apparently Smith has no idea who Hagler is.

“… he might pull a Hagler on us. He’s got that kinda mentality”, said Smith.

I could write 1,000 words on all of the ways Hagler’s situation and mentality were the complete opposite of Mayweather’s, but I will spare you and try to sum it up quickly.

Hagler did not quit because he lost to Sugar Ray Leonard. A victim of boxing politics for his entire frustrating career, Hagler’s loss to Sugar Ray was merely the straw that broke the camel’s back. The idea that everything was dandy and one loss sent Hagler packing is ridiculous. Except for greatness, Hagler and Mayweather will never have anything in common.

Unlike Hagler, Mayweather has never had to struggle in the sport. Not one shred of proverbial “straw” has ever touched Floyd’s back. Boxing has been very good to him. If he quits over a loss, his poor sportsmanship will be legendary. It will end up being what he is remembered for, much in the way that “No Mas” is still synonymous with boxing legend Roberto Duran over 30 years later.

Unlike the relatively humble Hagler that plugged along, stepping up to every challenge he could get, ego and money have always been what drives Floyd. If he knows he won a fight and he got a bad decision, he’ll be confident enough to be able to get back in there and prove everyone wrong. The negotiation will be difficult, but it will happen.

Steven A. Smith believes otherwise. He believes Mayweather would just shrug his shoulders and walk away out of frustration. When has Floyd, ever let frustration guide his actions? I just don’t see it. As long as the demand is there to make a large enough paycheck, you can be sure Floyd will be back in the ring with Pacquiao within the year… win lose or draw.