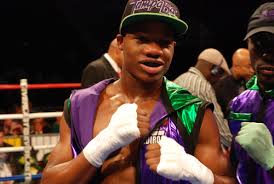 On Friday night, October 24, undefeated Middleweight Antoine “Action” Douglas will headline a great night of boxing at the Ukrainian Cultural Center in Somerset, New Jersey.
The scheduled 8-round bout will be the main event of a card promoted by GH3 Promotions.

Douglas of Burke, Virginia has a record of 14-0-1 been one of the most talked about Middleweight prospects in the United States. The 21-year old has quality wins over undefeated Colby Courter (4-0) and Marquis Davis (8-0-2). Douglas was impressive in scoring a sensational 2nd round stoppage over former world title challenger Luca Messi (37-9-1) on April 4 in Parsippany, New Jersey.

In his last bout, Douglas and former world title challenger Michel Soro (23-1) fought at highly contested draw in a bout that Douglas dominated over the first half of the bout.
That bout headlined the 200th episode of the highly acclaimed ShoBox: The New Generation series on July 25 at the Turning Stone Resort & Casino in Verona, New York.
Douglas’ opponent will be named shortly
In the eight round co-feature, Featherweight Jorge Diaz (18-3, 10 KO’s) will see action against an opponent to be named.
Diaz of New Brunswick, NJ will be looking for his 2nd consecutive victory after taking a 6-round unanimous decision over Ramon Ellis on July 25 at the Turning Stone Resort & Casino in Verona, New York.
Always in an crowd pleasing fight, Diaz has been known to take on all comers.
The 26 year-old has wins over Gino Escamilla (5-1-1), Yan Barthelemy (8-1), Alejandro Lopez (16-0), Jaesung Lee (10-2-1) & former world title challenger Emanuel Lucero (24-5-1).
Also on the card in 6-round bouts:
Undefeated Super Middleweight John Magda (7-0, 6 KO’s) of Ruthorford, NJ & Lightweight Wanzell Ellison (11-1-1, 5 KO’s) of Newark, NJ.
In four round bouts:

Tickets for this outstanding evening of boxing can be purchased for $125 for Stage seating, $100 for Front Row, $75 for Ringside and $50 for General Admission by calling 862-223-9487.
The Ukrainian Cultural Center is located 135 Davidson Avenue in Somerset, New Jersey
Tweet