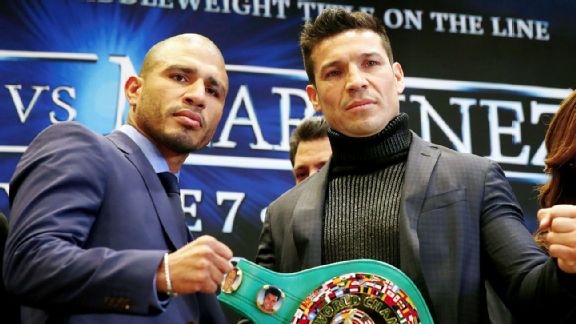 I want to first start off by saying that both Miguel Cotto and Sergio Martinez have earned the right to be called great fighters but I have to say in my opinion that Miguel Cotto has the better resume because he has fought elite future hall of fame fighters such as: Manny Pacquiao, Shane Mosley, and Floyd Mayweather. He’s also fought and beaten some very good solid fighters like Antonio Margarito, Joshua Clottey, Zab Judah and Paulie Malignaggi. Although he did lose to Mayweather and Pacquiao, they were both considered the two best fighters in the sport at the time and Cotto did have some good moments in both fights.

His first loss to Margarito back in 2008 will always have a black cloud over it due to the alleged highly suspicious circumstances regarding Margarito’s hand wraps. Cotto’s most recent loss to Austin Trout, who is a solid fighter in his own right, is the one that seems to be fresh in most people’s minds. Trout is considered a solid fighter but he is not at the elite level. Although Cotto lost that fight I felt it was close and I actually scored it 115-113 for Trout.

Martinez won the WBC Middleweight Title by beating Kelly Pavlik and avenged his loss to Williams by knocking him out in two rounds in a rematch that was the first defense of his title.

After looking at both men’s total body of work I truly believe that Cotto has more experience at the elite level whereas in my opinion Martinez has never been there before. I know the argument will be that Cotto lost to two of those elite fighters but in my opinion he showed that he belonged in the ring with both men.

I agree with Cotto’s trainer Freddie Roach when he said that he believes that Miguel Cotto is a better boxer than Sergio Martinez. Miguel Cotto appears to be the more conventional fighter who has very good technique and works comprehensively behind an educated left jab. Cotto also has that killer left hook that he delivers with malicious intent to both the body and head. Roach says that he has Cotto throwing that punch more to the body in preparation for this fight and if that is true, it could spell trouble for Martinez who many suspect is fighting on less than perfect legs.

Martinez is a fighter who got off to a late start in his career and does not have Cotto’s extensive amateur background. He is a very unorthodox southpaw who relies a lot on his legs and athletic ability to thrust himself in and out of danger while employing an ambush style offence. Martinez likes to fight with his hands down and he tries to sucker his opponents into a surprise counter punch much like he did to Williams in their second fight.

The big question here is: Does Martinez still have the legs to execute this style effectively? He is nearly 40 years of age and he has had two right knee surgeries in the last two years. The first one was to repair ligament damage and the second was to clean out scar tissue from cartilage damage.

Martinez in my opinion has a young man’s style in an old man’s body and for that very reason I have to go with the more technically sound Cotto in this matchup. Although Cotto has had his share of tough battles over the years, I see him as the fresher fighter. I feel that he will able to use his conventional, technically sound style more effectively than the free wheeling Martinez.