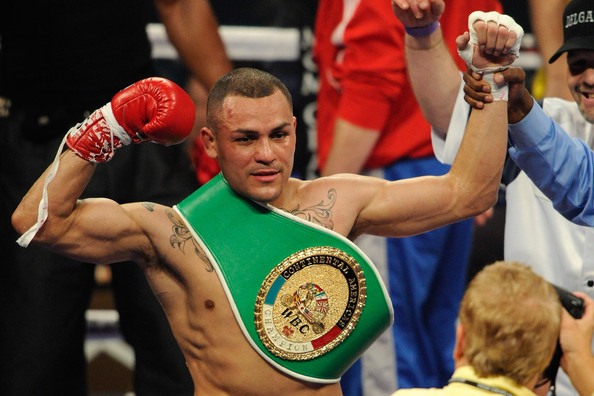 On October 13th — at the Home Depot Centre in Carson, California — we the fans will be blessed by the boxing gods. Every so often a fight is made in which one can expect the type of fireworks we will receive between undefeated “Mile High” Mike Alvarado against (also undefeated) former Lightweight World Champion Brandon “Bam Bam” Rios. This is the type of fight a blind man could still see will be a fast paced all action war. It’s a bold move by Rios, this being his first fight at a new weight class and jumping in to mix it up with one of the toughest fighters in the division. “I was excited when I heard about this; I was in shock at the same time. I couldn’t believe their camp actually took this fight. They know it’s a huge fight for him especially stepping up from the light weight division stepping up to the baddest dude in the junior welterweight division, the biggest and strongest guy. I guess he wanted to take his chance and risk right off the bat; I’m excited they took the fight it’s the perfect fight for me to show the world so they can put me on that next level. Put me in the running for a world title, I know after this fight it’s going to be shown and everybody going to know what level we both belong on, I’m looking forward to it, I’m excited, I’m pumped up I’ve been training for a fight like this for a while now, I’m ready for it,” said Alvarado.

Brandon Rios (30-0-1, 22 KO) defeated Richard Abril (17-3-1, 8 KO) by split decision with scores of 117-111 in favor of Abril and 116-112 and 115-113 in favor of Rios. The scoring was disgraceful and Rios walked away with a controversial win that no one felt he deserved. “I believe there’s a little bit of extra pressure for him [Rios] depending on how he deals with pressure, every fighter is different, I don’t really deal with pressure, I take every fight the same, but him coming up to junior welterweight his first fight in the division against somebody that’s bigger stronger and that’s fought bigger fighters and is obviously the bigger physical fighter. I know he has to have some kind of pressure on him obviously he thinks he’s ready for it, he took the fight.” added Alvarado.

When the final bell rang, everyone expected that Abril was going to shock the boxing world by handing former lightweight champion Rios the first loss of his career. Thanks to judges Jerry Roth (116-112) and Glenn Trowbridge (115-113) both scored it for Rios for the split decision. With that in the back of Alvarado’s mind one has to wonder if he would rather the fight not go to the scorecards. “I don’t think there’s any percentage of probability [this fight goes the distance] with our styles. I’m just that confident, I know I can’t and I’m not going to let this fight go the distance. Look at his last fight, I didn’t  really watch it round for round with him and Abril but just hearing it from everyone else how he’s got a couple good decisions. It’s in his back yard so I’m not letting this fight go the distances what’s so ever, no matter what I have to do,” explained Alvarado.

Some blame Rios’ last performance on Abril and the fact that he clinched far too much, Alvarado is no clincher and this will be no love affair, this will be two men that come to do battle; one looking to prove his weight issues are a thing of the past and the other looking for what’s on the horizon by stealing the fame of his opponent. “He knows the type of style that he’s up against; he knows the type of fighter that he’s going to be up against. This is a must see TV fight, it’s the type of fight that people want to see, it’s exciting, it’s entertaining to everyone, this is a fight that nobody is going to want to miss out on because how well our styles match up. This is going to be huge come October 13, and I’m just excited.” added Alvarado.

Mike Alvarado and Brandon Rios are similar in many ways, from the outside Alvarado is the more skilled one. Yet, both fighters showed signs of struggle in their last two outings. Since his bloody war with Columbian hard hitter Breidis Prescott last year Alvarado has shown he can be hit and be hit often and Prescott is no world beater, between the two Rios has faced the tougher opposition. “It will be who can make the adjustments to land that punch, who makes the adjustments to make more of a difficult fight. We can say it’s going to go this way, we can prepare for a war, but who knows it might be a boxing lesson I might go in there and put on a swift boxing show and not even stand there and let him go toe to toe. You never know until we get in there that night,” explained Alvarado.

It’s no secret that Brandon Rios has repeatedly missed weight and struggles at the scales to make weight; hence the move up in weight to a new weight class, but Alvarado can care less because the show must go on in his eyes. “I’ll let him get as close to 140 as he wants, I’m still the bigger stronger fighter, I’ll let him have a couple of pounds, I want this fight, this fight has to happen. Hopefully he’s discipline and has the best camp he’s ever had so that doesn’t have to happen. He’s already been over weight in his last couple of fights, moving up in another division he shouldn’t have problems making that weight. It’s a higher division a bigger opponent. Be on top of your game and make weight prove it to everyone, prove it to yourself that you can make the weight,” explained Alvarado.

Mike Alvarado knows the political side of boxing, for that very same reason he feels it’s imperative he wins come October 13, with a name like Rios on his resumé, a fight with Juan Manuel Marquez becomes more feasible. “That’s the fight that we are looking for but the question is will Juan Manuel Marquez take that fight. I’m a huge risk in the division, I’m a huge threat, everybody knows it I’m on top of my training, I’m only getting better as far as skills and strategy and just being in that ring.”

The notion that should fighter A beat fighter B in order to get the fight with fighter C rarely comes to fruition, but this year we’ve seen it happen with Josesito Lopez upset victory over Victor Ortiz making Lopez the winner of the Saul “Canelo” Alvarez Sweepstakes, Alvarado is hoping for the very same treatment from his promoter Top Rank and stable mate Marquez. “I don’t see why he would of deserved that shot when barley got by Abril, I mean I stole the show that night with my performance vs. Herrera. It’d be a better fight I’d make it a better fight then Rios would.”

October 13, means a bigger picture for Alvarado, not that he’s overlooking just that he’s focused on winning and moving on to greener pastures. “I believe the WBO title holder is Juan Manuel Marquez, I mean I don’t see why I wouldn’t get that fight, this fight is for the WBO title eliminator so who ever has that WBO should defend that belt. I want the guys that have the crowns in my division.”

For Full Audio Of This Interview Click Here: http://www.blubrry.com/thaboxingvoiceradioshow/1517304/daniel-geale-realdealgeale-mike-alvarado-milehighmike303-sep-062012/